The Trump Regime Has Zero Credibility 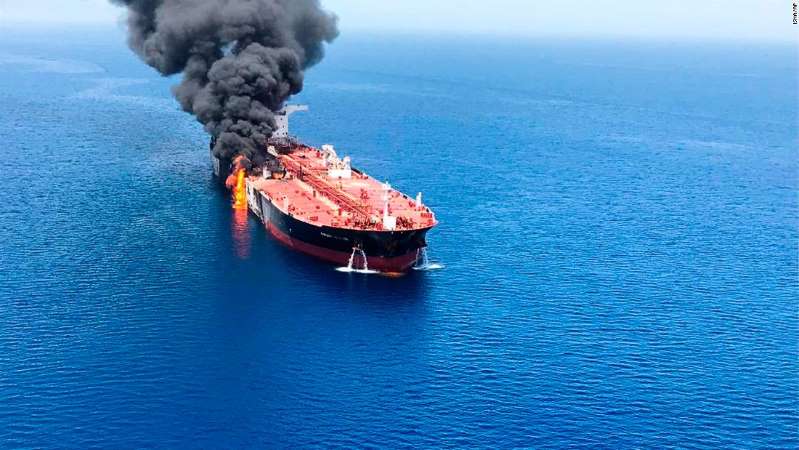 Here’s a public service announcement. Trump, and the people who work for him, do not tell the truth about anything. They’ll lie at the drop of a hat. They’ll lie about whatever they want, and they don’t care what the facts are. They’ll lie about things that are easily proven to be lies. The truth means nothing.

Having said that, don’t believe anything about what is going on in the Persian Gulf:

The attack on two tankers in a vital Gulf of Oman waterway Thursday comes at a time of heightened tensions between the United States and Iran in the oil-rich region and raises concerns of a potential conflict in the Middle East.

US Secretary of State Mike Pompeo was quick to point the finger at Iran, saying his assessment was "based on intelligence." While Iran denied involvement, the US military on Thursday released a video that it said showed an Iranian navy boat removing an unexploded mine attached to the hull of one of the tankers in an apparent attempt to recover evidence of its participation.

On Friday, however, the Japanese shipping company that owns one of the tankers said it did not believe its ship was attacked by a mine.

The incident bears similarities to an attack on May 12 when four oil tankers were targeted off the coast of the United Arab Emirates in the Gulf of Oman.

Like Thursday's attack, that incident took place near the Strait of Hormuz, a vital shipping route that has been the focal point of regional tensions for decades. About 30% of the world's sea-borne crude oil passes through the strategic choke point, making it a flashpoint for political and economic friction.

We’re being lied to.

We’re being sold a bill of goods.

We’re being tricked into supporting a broad escalation of the existing conflict in the Middle East as it relates to Saudi Arabia, Iran, and all of the bad actors who are trying to advance their agendas through any means possible. Iran is not going to act in good faith, and that’s been proven out time and again. But all of our erstwhile allies are just as culpable as well. There are no innocents here. And the difference is, there is no State Department. It is not functioning anymore because it has been emptied of the people who could manage, curtail and eliminate this sort of crisis. The Department of Defense is in the hands of a guy who wants to sell more planes, not stop a war between Iran and the countries around it. And Trump is calling the shots? Good God.