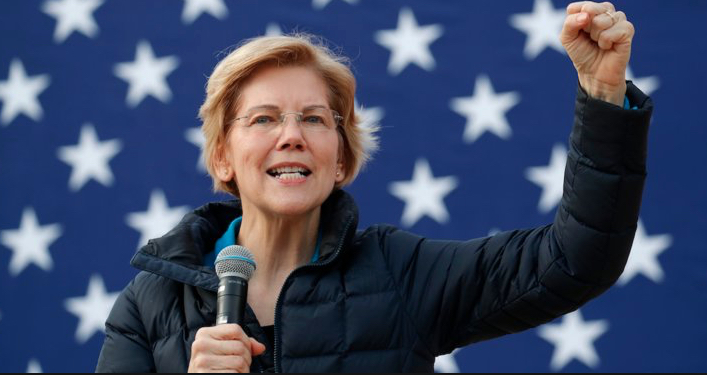 Doug Schoen wants the people who own his soul to know that he is there for them:

Simply put, this recent momentum from Warren spells bad news for the Democratic Party. The lawmaker from Massachusetts has centered her run around liberal big government policies that once only appealed to the left most fringes of the party. To be sure, her jump in the polls is indicative of how far left the party has moved and suggests that the party will nominate a radical candidate who is unpalatable to independents and moderates, two groups essential to beating Donald Trump in the general election.

The major components of her presidential campaign platform include expanding the reach of the federal government to tackle core inequities in American society, particularly through greater Wall Street oversight and policies to reduce income inequality by raising taxes on the wealthiest citizens. In a recent town hall, Warren touted her proposed wealth tax that she claims will allow the United States to have universal child care for kids aged five and under, universal college, and a significantly reduced loan debt burden for 95 percent of students, with almost $1 trillion left over.

Virtually everything he says is wrong. The American people are moving to the left on every issue that matters. Do you know what is “unpalatable to independents and moderates?” A president who thinks Nazis are “fine people.” What is unpalatable is a trade war with China that puts people out of work and raises taxes for consumers. What the American people don’t want is another war in the Middle East. And they damned sure have rejected the idea that the president is above the law.

When it comes to the Trump Regime, the American people are tired of this bullshit. Everyone with a brain is breaking towards the Democrats, and support for the policies of the Democratic Party has caught fire everywhere. That’s why you saw the Blue Wave last year. That’s why there are so many more women in Congress. The American people are responding to Democrats who want to fix things. They want taxes to go up on the rich because they have now had a taste of Trump’s tax policy. People are hurting, and they don’t want less government—they want smarter government that works for them. It’s as if Schoen woke up yesterday without realizing what has changed in America. Despite nearly a decade of effort, the GOP has failed to convince Americans that they should not have health care.

Oh, and the GOP? How could it be more unpopular?

Hey, Doug. What’s your plan to deal with the fact that the cost of insulin has doubled? Elizabeth Warren has a plan to fix it and it involves common sense and taking care of the American people.

How on Earth is that bad for the Democratic Party? To have someone smart, capable, and armed with plans to fix the shit that Republicans have broken?

Please Note: I have not decided who I am going to support in the 2020 presidential primary. But a candidate like Elizabeth Warren can beat Trump and can fix the problems that we face. The Democratic Party has numerous candidates who fit the bill.