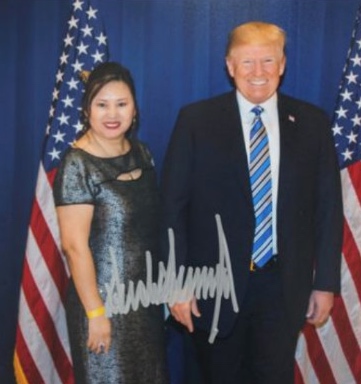 In any other era of American politics, this would be a scandal of epic proportions and would define an entire presidency. In the Trump era, this is what you sweep up on a Friday morning after an endless series of events:
The FBI has opened a public corruption investigation into Republican donor and South Florida massage-parlor entrepreneur Li “Cindy” Yang, focusing on whether she illegally funneled money from China into the president’s reelection effort or committed other potential campaign-finance violations, the Miami Herald has learned.
Investigators obtained a federal grand jury subpoena Tuesday seeking records from Bing Bing Peranio, an employee of Yang’s family’s spa business who last year contributed a maximum $5,400 to President Donald Trump’s reelection effort, according to a source familiar with the probe. Yang came to Peranio’s workplace and helped her write the check, Peranio told reporters from The New York Times, who first reported the contribution. Peranio told The Times she didn’t “say no.”
The subpoena asked for any records related to that March 5, 2018, donation and possibly other contributions between 2014 and the present, said the source, who asked for anonymity to discuss an ongoing federal investigation.
In a brief phone interview with the Miami Herald, Peranio confirmed that she had received a subpoena and that FBI agents had interviewed her at her home Thursday.
She declined to discuss the nature of the conversation but said she did not understand why investigators were interested in her political contributions. “It’s not just me,” Peranio said. “I don’t know why I always get it.”
I’m sorry, but Bing Bing Peranio is today’s version of Bebe Rebozo, and this isn’t even counting all of the other weirdos that have latched on to a presidency so corrupt, we may never know the full extent of the lawlessness that has been happening before our eyes.
Here’s a slice of hilarity from the New York Times, which should be front-paging every single development in this story:
One of the $5,400 political donations came from a 25-year-old woman who gives facials at a beauty school, in a strip mall in nearby Palm Beach Gardens that is owned by Ms. Yang’s family. Another $5,400 came from a woman who says she worked as a receptionist at a massage parlor owned by Ms. Yang’s husband. A third gift of $5,400 came from an associate of Ms. Yang’s who had been charged in 2014 after a prostitution sting with practicing health care without a license, police records show.
The receptionist, Bingbing Peranio, listed as a “manager” on her disclosure, spoke with a reporter about her relationship with Ms. Yang. She described herself as a big fan of Mr. Trump’s and said Ms. Yang, a registered Republican, was seen as a leader among Asian-American Republicans in Florida.
Ms. Peranio said Ms. Yang had come to the spa where she worked at the time and helped fill out the check toward the president’s campaign. “I can’t say she was pushing me or not pushing me, but I worked there then,” she said, speaking at her home in Jupiter. “I was working there. I didn’t say no.”
Thanks again to our political elites and our ruling class. They really, really failed America. No, go ahead. Tell me how the Clintons brought all kinds of shame and dishonor to the presidency. Tell me again how President Obama’s tan suit really was the end of Western civilization.
The media’s stunning hypocrisy and lack of institutional memory and perspective is really the story here. An incredibly unpopular president who can’t staff the Federal government, who can’t go from one day to the next without lashing out like a toddler, and who is surrounded by incompetent criminals is literally involved in a cheap scandal with Chinese women who provide masturbation services to old, white men in Florida. It’s as if the worst screenwriter in America wrote a rough draft of what would happen if America elected a con man president and forgot to include plausible events and details.
on May 10, 2019