Another Salvo in the Information War 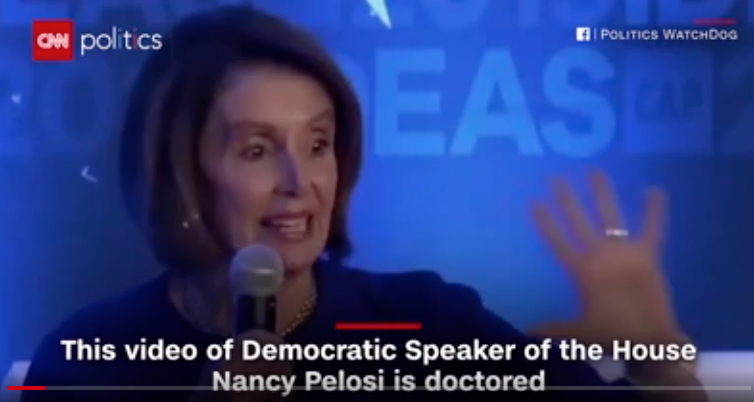 Rarely do you see news organizations move this fast to debunk something that comes from the fevered swamp of right wing disinformation:

A manipulated video being shared by some social media users to spread a false claim that House Speaker Nancy Pelosi slurred her words after meeting with President Donald Trump on Wednesday has been removed by YouTube, the company told CNN on Thursday.

The crudely edited video comes amid warnings from the US intelligence community that more sophisticated video manipulation may be part of future disinformation campaigns targeting the American electorate.

The video, which shows Pelosi's onstage comments at the Center for American Progress on Wednesday, has been slowed down, which makes her words seem slurred.

Pelosi's spokesman declined to comment on the video when contacted by CNN. When asked about this video and other manipulated videos targeting Pelosi, her spokesman Drew Hamill told The Washington Post, which first reported the story, "We're not going to comment on this sexist trash."

This is what they do—they lie in order to gain any advantage. They will never, ever respect or follow any of the rules that liberals apply to themselves.

When Democrats say they won’t take PAC money or respond to this sort of thing or when they ignore what’s happening, I just want to point out that the information war that we are currently living in is one where your purity tests and your good behavior are going to get you wiped out. I would put a premium on behaving honorably if this was 2008 or 2012. I wouldn’t bet on that for a while because we have entered a phase in American history when Republicans are not bound by any rules of normalcy. They have to be engaged and defeated on a battlefield that is littered with these attacks.

Put it this way. The alt-right, the fascist right, and Trump supporters are counting on you to clutch your pearls and decry this sort of tomfoolery. They don’t fucking care about anything and they’ll do whatever it takes to win.

What are you going to do to stop them?