There's Nothing Wrong With Taking Information From Russians 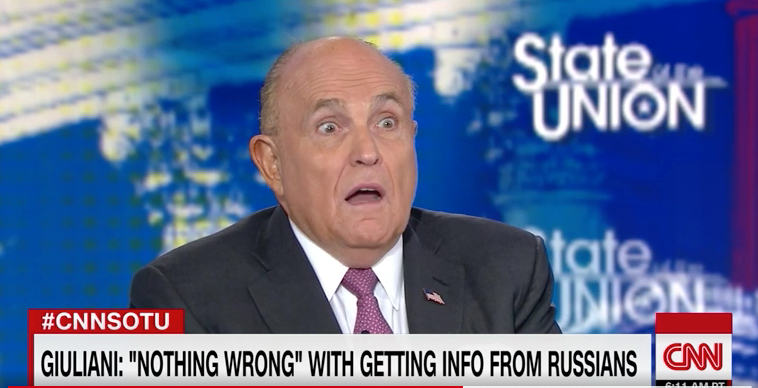 We have now come full circle. We have entered a phase of American politics where this sort of thing doesn’t even shock people anymore:

President Donald Trump's attorney Rudy Giuliani said while he would have advised the Trump campaign to avoid Russian help, he thought there was nothing wrong with a campaign taking information from Russia.

"There's nothing wrong with taking information from Russians," Giuliani said Sunday on CNN's "State of the Union."

Asked by CNN's Jake Tapper if he would have taken information from a foreign source, Giuliani said, "I probably wouldn't."

"I wasn't asked," Giuliani said. "I would have advised, just out of excess of caution, don't do it."

The depressing realization is that Trump will never lose more than 20% of the Republican Party. He has them firmly in his hip pocket, and they have gone all in on this ride through hell. That’s more than enough to hold onto going into 2020 and that’s what will make the race close for any Democrat who wins the nomination. They’re now embracing treason as a strategy to maintain power, and they’ll take help from the Chinese and the Saudis, too, so fuck it.

This is why the Democratic Party has to stop Bernie Sanders in his tracks, find a nominee who can beat Trump, or we’ll be living through another four years of this. And, by the time we come out the other end of this, we won’t have a country anymore unless we push back hard on what America’s Greatest Lawyer said today.

Jesus, Rudy. Go ahead and buy that apartment in Moscow for you and whatever mistress you’re seeing.