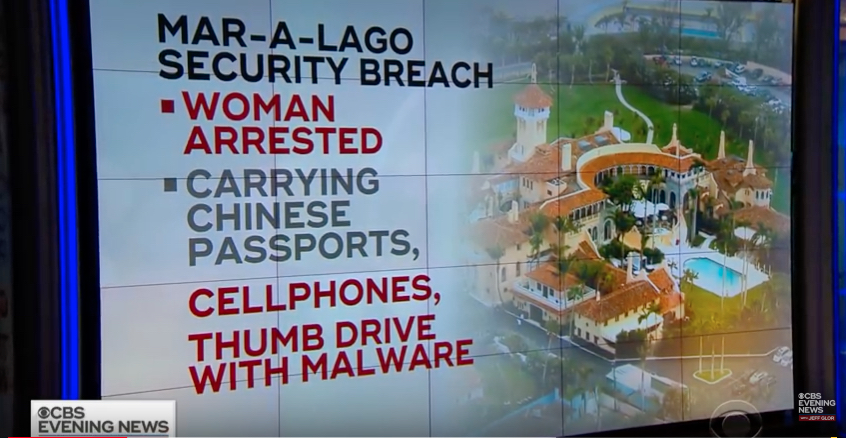 The Trump Regime is a walking, talking security violation of epic proportions.

A Chinese citizen who tried to enter President Donald Trump's Mar-a-Lago club Saturday carrying a thumb drive containing malicious software is being charged federally with lying to a Secret Service officer and having knowingly entered a restricted building.

When Yujing Zhang attempted to enter the club in Palm Beach, Florida, she was stopped by Secret Service agents at a security checkpoint, according to court documents.

She showed two Chinese passports with her name and photograph to the agents, who then took her to Mar-a-Lago security to see if she was a member of the club.

Mar-a-Lago allowed Zhang to enter, according to the documents, because part of her name matched that of a member of the club. Zhang gave a nondefinitive answer when asked if that member was her father, according to the court documents, and was admitted by the club "due to a potential language barrier issue."

Zhang had said she intended to go swimming at the club, according to court documents. When she appeared unsure of where to go, according to the arrest affidavit, she told a club receptionist she was at Mar-a-Lago for a United Nations Chinese American Association event later that evening — a nonexistent event. The receptionist alerted a Secret Service agent, who detained Zhang for questioning.

Given the fact that Trump uses an outdated phone that can be intercepted and monitored by numerous intelligence agencies throughout the world, why are we surprised at this? Why should we trust any Republican anywhere when they talk about national security and being serious about protecting this country?

You have no idea how unsafe you really are with this group in charge of things. How much do you want to bet this disappears quietly, and, in a few months, this woman vanishes back into Chinese government custody. You know that the the security apparatus in China is figuring out how many Americans they can pick up and detain as we speak.

This is just the woman they caught. Think of all the others that they didn’t catch. Think of how brazen it is for a Chinese agent to stumble her way through Mar-a-Lago, knowing full well she’ll be able to get away with whatever they told her to do.

Thank God there isn’t a Democrat in the White House. The GOP would burn down the capitol, screaming about who knows what.