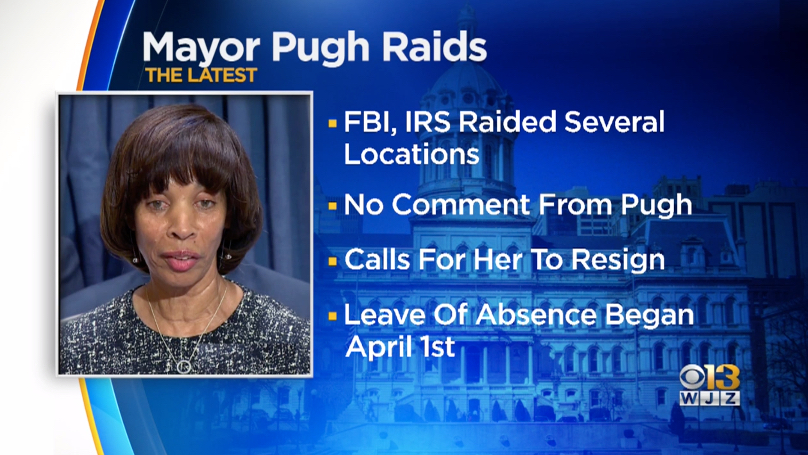 The mayor of Baltimore, Maryland is the subject of several criminal investigations and should resign.

Where is Baltimore Mayor Catherine Pugh? It’s the question buzzing around the city as the FBI and IRS raid Pugh’s home, City Hall and several other locations tied to her Thursday. But, no one has seen the mayor even though she’s supposed to be recovering from pneumonia.

WJZ has learned Pugh is at one of her Baltimore homes after meeting with her legal team Thursday afternoon.

An earlier report said she may have been trying to get out of town, but attorney Steve Silverman spoke to the WJZ outside her home Thursday and said the mayor is physically ill and emotionally saddened. He said she apologized for letting down the people of Baltimore with any appearance of wrongdoing.

Pugh is not mentally or physically able to make any decisions Thursday, according to Silverman.

This is how Democrats handle corruption, incompetence, and lawlessness. We look at what’s happened, and we make a decision based on solving the problem at hand. Mayor Pugh is incapable of dealing with what’s happened to her. There is definitely the chance that she is innocent of everything that she is accused of, and that’s how our system works. But, at the end of the day, you have to be able to lead people and do your job.

Mayor Pugh can’t do that.

So, Mayor Pugh needs to put the needs of the City of Baltimore ahead of her own personal issues and resign.

How hard is that to understand? Democrats get a bad reputation for turning on their own. I get that. But, in this case, Mayor Pugh is a shambling, incompetent wreck of a city leader. That may not have been how she came into office, but that’s where she is right now and she has to go.