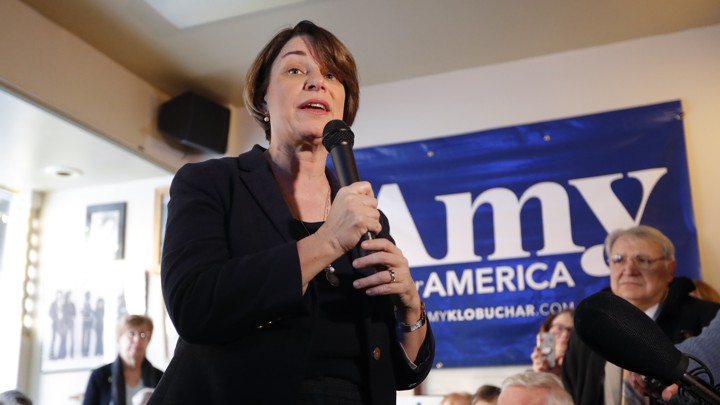 Senator Amy Klobuchar needs to emphasize her experience as a prosecutor and maybe not get so bogged down in economics.

“It’s kind of looking back in time, when the Midwest was driving the economic engine of the country, which it does in certain segments still. It was the Midwest that stood up for people,” she said. “So ‘heart’ is about, you know, the heart of America, the middle of America, but it is also about economics with heart, which means you’re looking out not just for the people at the top and the titans, you’re looking out for people who are … working the economy. And what the Midwest did, when you go way back to the early 1900s, it was the Midwest that stood up on the antitrust issue, and it wasn’t just the farmers and the grangers with their pitchforks, it was also the Chicago strikers with the Haymarket strike and the Pullman strike, and it was really a Midwest issue when you look at it.”

She accepted that, of course, Teddy Roosevelt was busting trusts too, but “this is a political movement that started here, and it was a movement that said small farms matter, small businesses matter, entrepreneurship matters, that’s the engine, this is why our Founding Fathers moved from England, because they didn’t want to be controlled by monopolies and the East India Company, and when they did they got really mad and threw the tea into the water.”
She added, “Heartland economics is a focus on rural economics, which is very different in terms of critical access to hospitals, broadband, and making sure that [rural Americans] can have a piece of the action.” Just over a week later, she added to this by releasing what she called a “trillion dollar” agenda to modernize infrastructure, which included these issues, as well as improving and replacing roads, expanding public transportation, and ensuring clean drinking water. She then set off on a tour of the rural areas in the western part of the state, which included flood-damaged communities and a stop at the Heartland Forum, an event focused on rural America, which also featured Elizabeth Warren, Julian Castro, John Delaney, and Tim Ryan.
At the heart of “heartland economics” is a core political belief that has a grip on the American psyche. The Midwest is the heartland, never questioned, though it’s not where most of America lives, and stopped being representative of the economics or demographics of the country decades ago—if it ever was. Geographically it will always be the middle, but it’s not the middle or average in most other ways—nor does the reality for most midwesterners in 2019 look like scenes out of The Music Man. The Midwest has millions of acres of farmland, but so do California and Virginia and Mississippi and Oregon. The region is full of farmers desperate about corporate-agriculture takeovers and now trade wars, thanks to the Trump tariffs, but the pain and feelings of being left behind often have more to do with industries being hollowed out by automation and globalization, and little to do with crops.

I’m sorry, but I want better answers than that, and someone with a real command of what’s wrong with our economy. I don’t want platitudes or nostalgia. We need to put people to work in real industries with sustainable wages.

Rural economics is misleading here. In Minnesota, the family farm is something that is becoming rare:

Today, there are thousands of acres of farmland across Minnesota, but there is little room for young people who want to make a living on the farm.
Family farms, not to mention the main streets and churches that grew up around them, continue to fade away, like the old red barns that once dotted the Minnesota countryside. Agriculture experts predict that what’s left of the small farm lifestyle is going to take another hit this spring, when a combination of  low commodity prices and high debt will lead to another round of foreclosures.

“We’re going to lose a lot of good people,” said Gary Wertish, president of the Minnesota Farmers Union. “This is potentially as bad as the 1980s. The numbers just don’t work.”
Indeed, no matter how hard they work, most small farmers can’t outwork the numbers. The cost of land, equipment and seed coupled with low crop prices is a formula that equals debt. And that leads to the harshest trend in terms of what rural Minnesota is going to look like in the years and decades to come. The state’s farmers are getting older (the average age is now around 55) even while it continues to get harder and harder for young people to get into farming.

So if you want to reverse this trend, Elizabeth Warren seems to have a better message. People are being left behind or cheated—what are you going to do about that? The system is rigged, and Warren is more adept than anyone at explaining why it is rigged.

What Klobuchar needs to do is abandon the thinking that says that the Midwest has some magical hold on America’s economy. It has tremendous potential to help move us further towards energy independence and renewables, but small towns are being left behind. If she can’t do economics, her record as a prosecutor is a great one, and her record of getting things done in a pragmatic way is probably her strongest suit.

Yes, economic issues and public safety seem to be cornered by Warren and by Kamala Harris—I get that. But Klobuchar has a lot of strengths that she has to start bringing to the table. I like her approach to infrastructure, but if we want to see anything happen there, we have to take back the U.S. Senate. I’m really leery about losing any of the current senators we have—Klobuchar, Harris and Warren are all incredibly talented. Don’t get me wrong—any of them could be the nominee and win the presidency. But to advance a truly progressive agenda, we need to take the Senate.
And, for God’s sake, don’t talk about the East India Company. Who cares?
on April 04, 2019