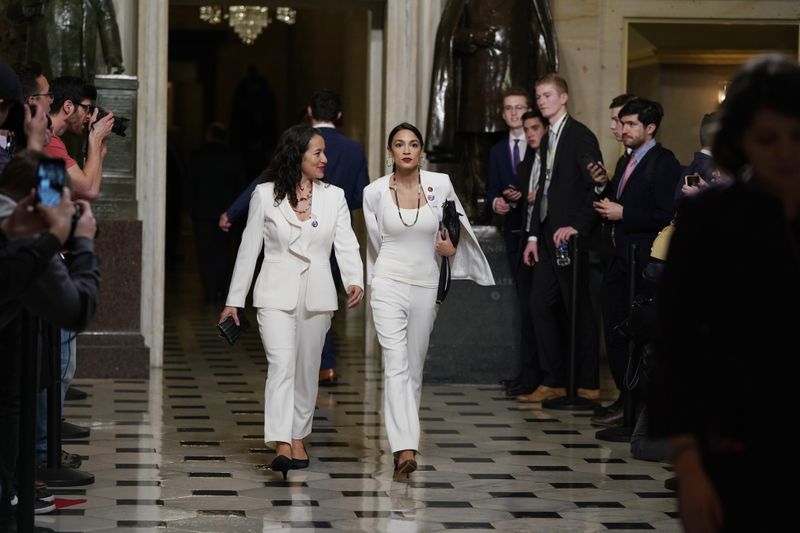 The policies and the ideas of the Democratic Party are actually very popular. Were it not for the propaganda, the racism, and the bullshit, they would be even more popular than they are now. Our country, structurally, cannot handle the power and the presence of smart women speaking truth to power.

When you read this story, remember the fact that one member of Congress has very little actual power, but if they have great ideas and if they work hard, they’ll have an outsized impact everywhere they go:

Last month, a clip of New York representative Alexandria Ocasio-Cortez went predictably viral after she forcefully responded to one of her colleagues on the House Financial Services Committee when he called climate change an "elitist" concern. "Wanting clean air and water is not elitist," she said.

In response, Kentucky Republican congressman Andy Barr invited Ocasio-Cortez to come meet coal miners in his state "who will tell you what the Green New Deal would mean for their families, their paychecks." His concern, he said, is that the Green New Deal would phase out U.S. reliance on coal and fossil fuel, which would wreak havoc on the lives of people who work in those industries. Ocasio-Cortez accepted, saying she'd be "happy" to go, adding that the Green New Deal was written to fund coal-miner pensions. "We want a just transition to make sure we are investing in jobs across those swaths of the country," she said.

All in all, it seemed like an uncharacteristically cordial exchange for two members of Congress. And not even a month later, that cordiality is out the window: Barr attached a rather inhospitable and obnoxious demand to his invitation, writing in a letter posted to Twitter that she should "apologize to [Texas representative Dan Crenshaw] prior to coming to visit Kentucky," for a completely unrelated event before meeting with miners. The public scolding over purported incivility, along with the random call for an apology to a colleague from a completely different state, leaves the impression that the Barr might not want her to come to Kentucky after all.

By all means, go to Kentucky. Go out to all fifty states. One of the best things that ever came out of Howard Dean’s failed run for the presidency was his Fifty State Strategy, which was bashed by the consultants but laid the groundwork for a few victories before it was abandoned in the Obama era. We need Ocasio-Cortez out there, doing her thing because she has a powerful voice and the moral authority to carry a populist message to everyone who is ready to hear it.

Ocasio-Cortez absolutely owns the GOP right now. They go crazy talking about her because they don’t understand her substantive take on things. The Republican Party is an anti-intellectual circle jerk right now, and they cannot handle anyone who is good at social media who actually has real ideas and convictions.

She should go everywhere and talk to everyone. Really, this is a battle of ideas we’re fighting, and why shouldn’t we expose the GOP for the bankrupt, screaming fiasco that it truly is?