The Minister of Fear 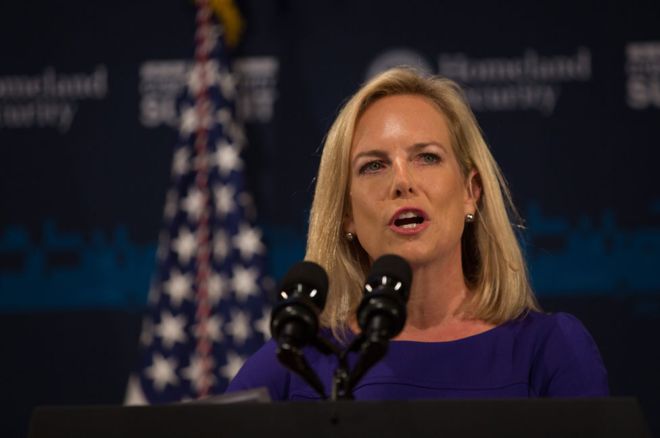 I thought Kirstjen Nielsen would have resigned by now. The oversight provided by the House of Representatives is not going to get any easier, and putting babies in cages would normally get you run out of public life. In the Trump era, you can be monstrous and wrong and still count on a deferential press, an uninformed public, and continued support from Republican politicians who are hoping no one notices all the other horrible shit that is happening:

The US homeland security secretary has steadfastly defended a border policy that has provoked condemnation because of its impact on children and families. But why has Kirstjen Nielsen's style also irked her critics?

During a House homeland security hearing on 6 March, Ms Nielsen said that border agents do not put children in cages in detention facilities. She explained: "If you mean a cage like this." She raised her hands above her head and drew an outline of a small, rectangular-shaped dog kennel.

Democrats disagreed. Regardless of the size of the wire-enclosed areas where children were held, the contraptions were still cages, said Bonnie Watson Coleman of New Jersey.

Ms Nielsen acted as an unwavering advocate for the president's "zero tolerance" border policy and for other measures during the hearing. She expressed staunch support for his national emergency and his wall and said she was working to ensure that the nation's borders were fully secure.

The Department of Homeland Security remains an indefensible idea. Our greatest threat is from angry white men with guns and that’s exactly what DHS is set up to ignore. To this day, no one can explain why it was a good idea to take all of those Federal agencies and add another layer of confusing bureaucracy on top of them so that the defending America’s “homeland” could be a perverted exercise in Going After the Wrong Thing, Always.

Nielsen’s ridiculous advocacy of things that aren’t actually emergencies is what makes her our modern Minister of Fear. Without the fear that she and Fox News and the rest of the conservative movement generates, America’s old people would probably shit themselves over Lady Gaga or Korean dance pop. How can you take an entire demographic and subject them to such a thing and sleep at night? There’s no crisis at the border. Hence, there’s no need to ramp up the fear. Ah, but we have a minister who does such a good job, and she’s blonde, so grandpa and grandma trust her even more. They’ve bought gold, extra thick adult diapers, and a whole kit that will keep them alive when Obama takes back the presidency and orders the seizure of every gun in America so he can let Nicaragua invade and occupy the Great Plains. They may not be able to find their way to the mall, but they’re ready for the end times.

If you think poor people fleeing oppression are the problem, well, this is your golden age, my friend. If you’re horrified by the prospect of an entire bloated and over-funded Federal agency trying to figure out which contaminated quarter of Goodfellow Air Force Base to use for a tent city dedicated to housing kids, join the club. I go days at a time, unable to write or comment on things because I just don’t get how any of these people, especially and including Nielsen, aren’t in Federal prison right now.

This is the most baffling era in American history for me. What should be a no-brainer—you can’t put babies in cages after you’ve forcibly kidnapped and separated them from their parents—is just another day of horror in this country. I don’t think any of us have lost our humanity. On the contrary, our basic humanity is under relentless assault, and we’re coping with it any way we can. I just don’t understand how nearly half this country isn’t even remotely bothered by any of what Trump and his cabinet officials have done.