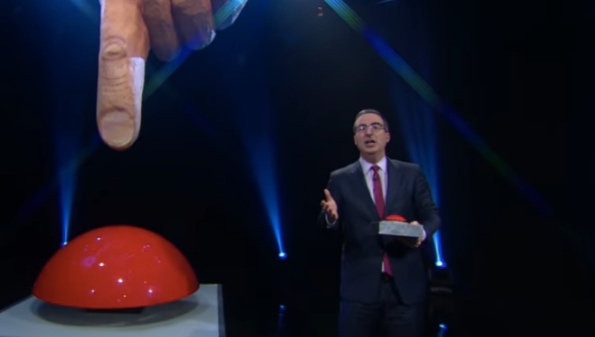 John Oliver tore into the Federal Communications Commission last night, and it was a brilliant takedown of just one aspect of the Trump Regime’s inability to do anything to protect American consumers from anything, including the endless robocalls that are being dialed every minute of every day:

After a typically riotous and informative 15 minutes spent examining the problem of scammers, corporations, and corporate scammers using every semi-legal trick in the digitized phone book to steal your mom’s social security number and tell you all about that credit card problem you don’t have, Oliver unveiled his plan. Noting in his piece that the FCC, under current head, enemy of net neutrality, corporate shill, and “goober,” Ajit Pai, opposed rules intended to curtail robocalls, has done literally nothing about them since taking over that agency, and, in fact, is proposing making robocalling easier, Oliver swung into action. He did take time along the way to, once again, taunt HBO’s new overlords at AT&T for their lackluster service. (“You like that, business daddy? Johnny’s getting spicy again!”) And to mock Maine Republican Senator Susan Collins for one particularly contrived phone stunt of her own. Showing testimony where Collins pretended to get an IRS call during a hearing, only to show that it was her staff spoofing the IRS number, Oliver noted, with signature acid deadpan, “Cool.” And said that “temporarily pretending to be one thing and then disappointing everyone when you reveal who you actually are” is a perfect encapsulation of faux moderate Trump-enabler and Kavanaugh-booster Collins’ voting record.

The fact that the FCC has done nothing to stop robocalling should surprise no one. Someone out there is getting rich fleecing the Americans who are unfortunate enough to be caught at the wrong moment and give something valuable away. The social engineering of the vulnerable helped steal a presidential election, of course, so why would Republicans want to protect people?

No, they want them to be susceptible to fraud so they can keep Trump in office.

There are people being tormented by these things all day and all night. The robocalls spoof localized phone numbers and trick people into responding. All of the Democrats running for president should take note—running on a platform to protect the American consumer should be standard practice because no one is looking out for them right now.