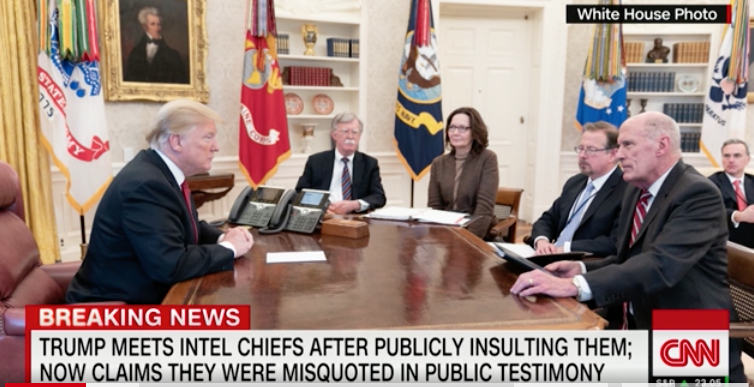 When you turn your country’s foreign policy over to a man who found a way to bankrupt his own casino, it is inevitable that he will end up listening to the advice of a man too stupid to realize that a Russian agent was able to get him to say nice things about Russia’s non-existent pro-gun efforts. This is the most comically inept group of human beings to ever run the national security apparatus of the United States government. They are so completely and utterly incompetent that it should cause people to flee the country in terror.

Seriously, if you’re thinking about New Zealand and a quiet place out of the Northern Hemisphere, I’m with you because holy shit:

President Donald Trump claimed Thursday that his intelligence chiefs, including Director of National Intelligence Dan Coats and CIA Director Gina Haspel, told him that they were misquoted when they publicly contradicted him during public on-camera testimony.

He made the claim a day after he tweeted that "Intelligence should go back to school!"

"They said they were totally misquoted and totally taken out of context," Trump said when asked by CNN if he raised the testimony with Coats and Haspel during his daily briefing on Thursday.

"They said it was fake news," Trump said.

The President did not provide examples of the areas the intelligence chiefs said they were misquoted. Their testimony was televised, and their written assessment of global threats was made public.

Trump followed up those comments with a tweet insisting that Coats and Haspel told him their testimony was distorted by the press and that they are all on the same page.

The Republican Party has completely and utterly failed to save Trump from himself. They have failed to compel him to understand that we are spending untold billions of dollars to gather, organize, and analyze an almost incomprehensible amount of intelligence that is being ignored.

You could shut down the community of agencies that are gathering information on our enemies because it is not being utilized, internalized, or comprehended in any way by this regime. And it is a regime in every sense of the word. They do not recognize any norms, anything resembling the law, and they do not live in a fact-based, evidence-rich world. If it contradicts what John Bolton wants to believe about the world, it won’t get anywhere near Trump and it won’t be used by anyone setting the foreign policy of the country because it will, in fact, die in the hands of the National Security Council. This is the information-free era of American politics. Bolton is making sure Trump sees and hears nothing of value or importance. This is especially SAD! because you're paying billions of dollars in taxes to collect, store, and analyze everything that Trump will never, ever see.

Actual shit that is really happening is being ignored because the National Security Advisor knows that Trump doesn’t want to be told anything.

This has created a credibility meltdown. The Republican Party isn’t in charge because Trump doesn’t listen to them or care what happens to them when they come up for re-election. Their plight means nothing to him. The dangers creeping in all around us from our enemies mean nothing because, unless someone threatens his ego or his wallet, you’re on your own. Trump is barely showing up for work each day and our foreign policy is collapsing.

In a few years, there will be Republican Senators who will get up and criticize the decisions that a Democratic president is making and, in a just world, they would be laughed at and mocked because where were you when Trump was doing things a thousand times worse?

Don’t worry about their inflated sense of self-importance. Republicans are never held to the same standards that Democrats are forced to adhere to. The media will cover for them and allow them to have all of their credibility back because they love a GOP daddy who mansplains everything.