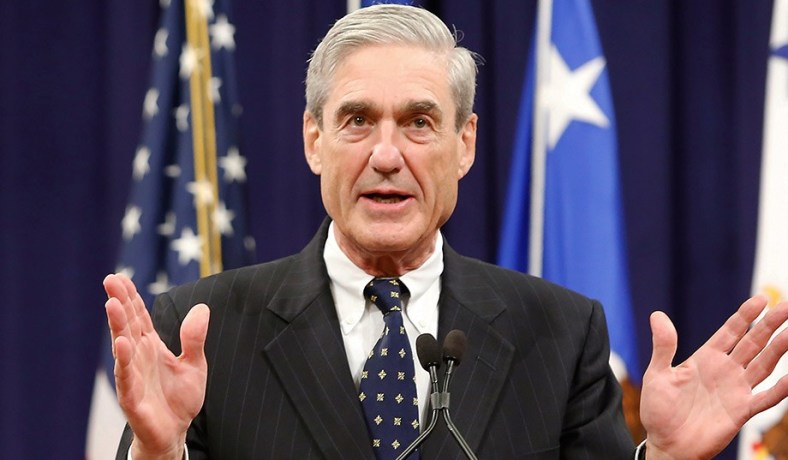 If you’ve been paying attention, the Mueller Report is pretty much out there already, and everything is in plain sight:

President Trump has benefited enormously from the frog-in-hot-water nature of special counsel Robert S. Mueller III’s investigation into his campaign and possible overlap with Russian efforts to influence the 2016 election.

Imagine if, instead of Mueller releasing new public indictments as he went along, leveraging criminal charges to obtain more information from the targets of his probe, he instead had kept his information private. Imagine if he and his lawyers had been working in quiet for 20 months, submitting expenses to the Department of Justice and suffering the president’s tweeted ferocity.

And then, after all of that, they suddenly produced a dozen indictments and plea deals running into hundreds of pages, detailing former Trump campaign chairman Paul Manafort’s illegal and questionable financial dealings, those of his deputy Rick Gates, full details of Russia’s alleged efforts to influence social media and to steal electronic information from Democratic targets and detailed a half-dozen people who admitted to lying to federal investigators.

Step back for a minute and think about two things.

One, we have never fully grasped how bad this is. We’ve seen bombshell revelations come, one after the other, and that’s not enough? In any other era in political history, Trump would have been forced to resign in shame. He is enabled by a media that gets fat and rich off the outrage that is produced by telling everyone how awful Trump really is. The media is your real enemy here because they have failed to help people grasp the lawlessness of the 2016 election. They hated Hillary so much, they were happy to let someone take over the presidency because they knew it would be a monstrous spectacle. Our media chose profit over civic responsibility. I’d be happy to see FCC licenses pulled for stations profiting off outrage.

Two, no Democrat would have ever been allowed to do anything Trump has done. That’s the double standard at work. Mueller probably understands that better than anyone, and this has forced his probe to work backwards in secrecy. They knew on day one there was collusion—a conspiracy to defraud the American people and steal a presidential election. Everything else has been about creating the legal framework to put these fuckers in prison. If you elect Republicans, they break the law. It’s that simple.

I don’t care what the Mueller Report says. There is no political will to impeach and then remove Trump. It would be the smart play for Democrats to let him continue to run wild through the tangles of the rule of law and then win the presidency back in dramatic fashion. As soon as a new president is sworn in, she should let the Justice Department deal with him and his family like they would any other American crime syndicate. Our elites failed to stop Trump, so now we have to let career lawyers and prosecutors apply the law fairly to the Trump family. That’s the one sane way out of this mess.

America needs to flush out this filth and get back to being a somewhat boring and normalized, functioning democracy. And if CNN and the rest go out of business because of that, so be it.