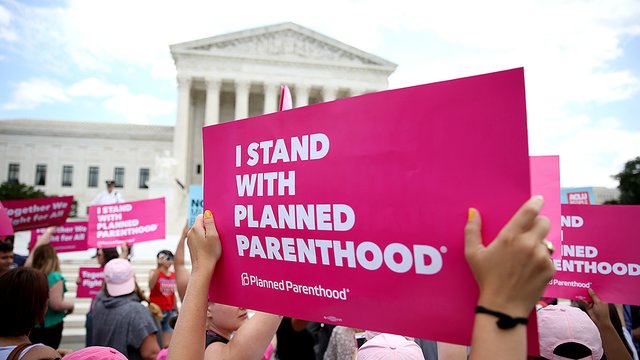 This is the kind of thing that gets lost in the shuffle on a weekend:

Title X, established in 1970, provides more than $250 million in funding for birth control and other reproductive health care services to approximately 4 million people every year.

Central to opponents' concerns about the rule are provisions that prohibit health care providers who receive federal funding from performing abortions or even referring patients elsewhere for the procedure.

"This rule intentionally strikes at the heart of the patient-provider relationship, inserting political ideology into a family planning visit, which will frustrate and ultimately discourage patients from seeking the health care they need," said Clare Coleman, president and CEO of the National Family Planning & Reproductive Health Association.

"This clear attack on family planning care could result in lower-quality care or none at all for people struggling to make ends meet," added Coleman, whose organization represents publicly funded family planning providers and administrators.

Trump has to keep his rabid base happy, and this certainly helps him stoke their hatred of the possibility that some poor young person of color might end up getting taken care of in a Planned Parenthood facility.

You may have been watching the Dirtbag Olympics on television when this came out, or you may have been distracted by all of the drama surrounding the president, his fixer, and the possibility that he paid off more porn stars. But this is the sort of thing that has a dramatic impact on people’s lives. This is the sort of thing that will actually kill people. The denial of access to health care results in people dying in the doorways of emergency rooms, which are already struggling to deal with everything else that is going wrong in America right now.

Every day, we have to fight to keep Planned Parenthood open. Millions of people depend on it for basic needs. This is the fight every Democratic candidate for president should be ready for.