CNN Loves What is Happening to This Country 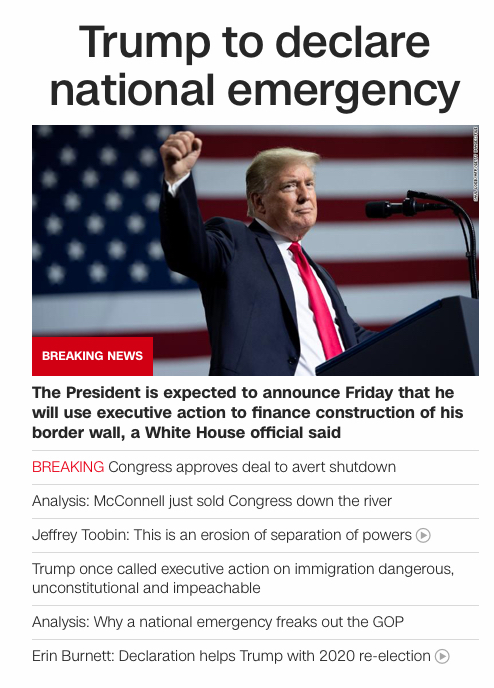 Correct me if I’m wrong, but CNN’s business model seems to be built on the premise that, as long as Trump is saying and doing stupid shit, they’re happy to tell you about it because your viewership matters more than anything else.

I am disgusted with the news and can barely write most days. I don’t even bother on the weekends anymore. Used to love writing about what was going on but now I’m just sick of it all. I watch the news and find myself looking at HGTV or hockey more and more.

This disconnect is not because I have a desire to stop interacting with the reality around us. It’s because far too many people are still too fucking stupid to realize what’s being done to the country. Far too many people are numb to the reality of the destruction of our democracy and the assassination of the very idea of civic responsibility. In a country where being a citizen really matters, you can’t give the facts a pass when they conflict with what you believe. You can’t ignore the reality of a Trump regime being completely out of control and flaunting their indifference to the rule of law. Republicans know exactly what’s happening but they don’t care. They know everything we know. They’re used to pretending that what Trump is doing only matters when a Democrat sniffs in the direction of doing it. So, fuck them.

This is my “fuck that shit” post for the month. I suppose I’ll figure out what to do tomorrow, but, really, fuck this shit.

Look at how stupid CNN is these days. Look at how stupid the media is in relation to the qualifications of Trump vs the qualifications of the Democrats who have announced they are running for the presidency. How many of these Democrats are going to let their son, their son-in-law, and their daughter, and their other son, and a bunch of cronies pillage the treasury for sport and laugh when you catch them doing it?

None of them are remotely corrupt or incompetent. But, to the stupid assed media, lead by CNN, they’re all on the same footing, and Amy Klobuchar yelling at a staffer or Elizabeth Warren believing what her parents told her is no different than Trump getting people killed in Syria or putting thousands of babies in cages.

This is the era of stupid, and I just get so tired of it, and I’m sure you do, too.