America is Unified Against Trump 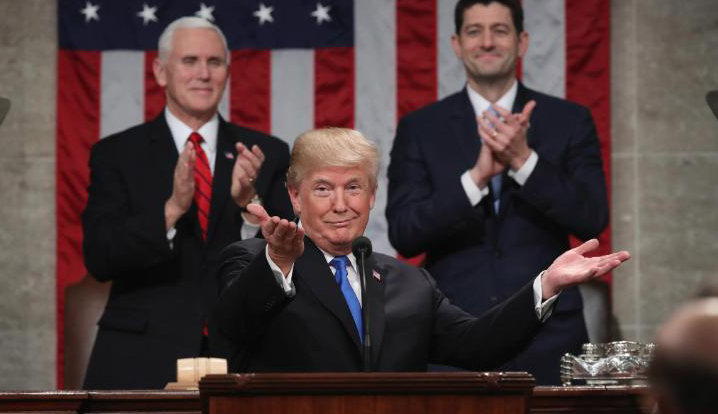 Everything that has happened since Trump took office has solidified Independents, moderates, and liberals against Trump and the GOP. The only dead-enders supporting Trump are that brain-dead mass that exists solely as an annoyance against progress. Fully 33 percent of the American people are never going to budge from their retrograde racism and stupidity, so all of this talk of “unifying” the American people is pure bullshit:

Donald Trump is set to deliver what his advisers claim will be a unifying State of the Union speech on Tuesday before a skeptical audience that for the first time will include a Democratic House majority.

Many of the President's past attempts at bipartisanship have quickly evaporated amid tweeted barbs and the driving issue of the day -- a $5 billion border wall -- is staunchly opposed by most Democrats and most Americans.

Trump will step into the House chamber around 9 p.m. ET with the aim of changing at least some minds on the wisdom of his policies and with his political nemesis, House Speaker Nancy Pelosi, seated over his left shoulder.

Speaker Nancy Pelosi is not his nemesis because they are not intellectual equals. Trump is Pelosi’s bitch, plain and simple. She has his balls in a vise and his manhood well in hand. She is so thoroughly in control of the House that there is no hope whatsoever that Trump will get anything that resembles a solid break from her unless it is in her interests to give him one.

And even then, kicking Trump to the curb is preferable to anything else.

Who cares what Trump has to say in public? He doesn’t write his speeches, he doesn’t believe anything, he cannot hold to any deal that he makes, he cannot take responsibility for his actions and he is only opposed to whatever Democrats want to do. There’s no substance to his actions, no reason to give him anything, and no hope for his presidency. He is finished.

The media won’t tell you he’s finished, but that’s what he is. He has a sack full of ashes to show for two years in office. He has more law dogs on his ass than whoever is currently public enemy number one. Twenty years from now, they’ll still be untying the vast knots of corruption and lawbreaking that happened on his watch.

Why would anyone watch Trump talk about the State of the Union? He doesn’t even believe in this country. He doesn’t believe in the law, in democracy, in America as an idea, or in the common good. He believes his own lies, and that’s it.