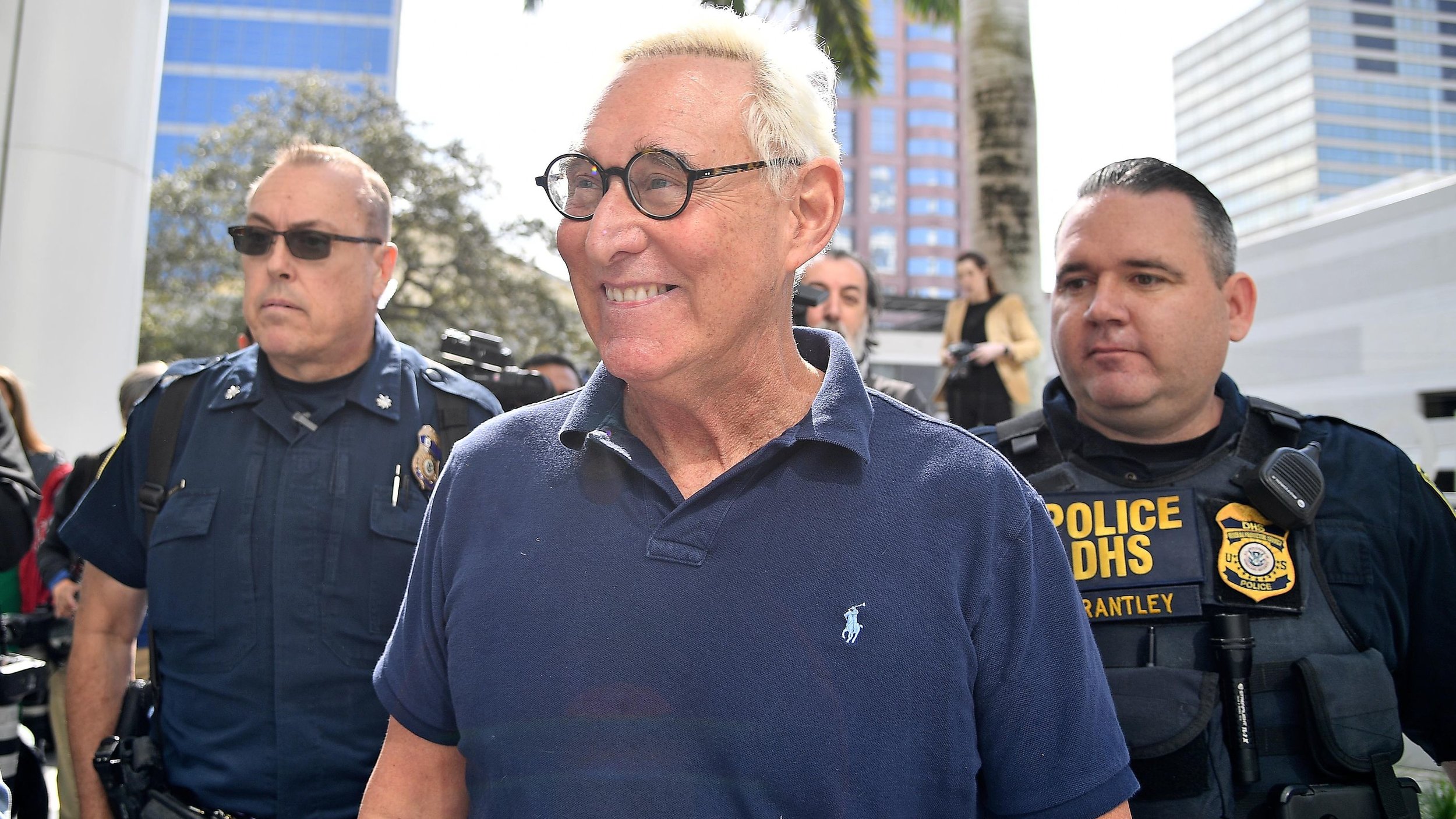 This is essential reading if you want to have a better understanding of what Roger Stone has done over the years to become the ultimate Republican rat fucker of his generation—it is probably the best piece of political writing Howard Fineman has ever done and it came out in the summer of 2008, if you can believe it:

Over the years, Stone’s relationships with colleagues and clients have been so combustible that his value as a messenger has been compromised. Stone worked for Donald Trump as an occasional lobbyist and as an adviser when Trump considered running for President in 2000. “Roger is a stone-cold loser,” Trump told me. “He always tries taking credit for things he never did.” Like Nixon, Stone is also a great hater—of, among others, the Clintons, Karl Rove, and Spitzer. So what happened at Miami Velvet one night last September, he said, amounted to a gift.

Despite being slagged off by Trump, Stone continued to work on behalf of Republicans, which is shocking because this episode should have brought an end to his association with the GOP:

Stone served as a senior consultant to Bob Dole’s 1996 campaign for President, but that assignment ended in a characteristic conflagration. The National Enquirer, in a story headlined “Top Dole Aide Caught in Group-Sex Ring,” reported that the Stones had apparently run personal ads in a magazine called Local Swing Fever and on a Web site that had been set up with Nydia’s credit card. “Hot, insatiable lady and her handsome body builder husband, experienced swingers, seek similar couples or exceptional muscular . . . single men,” the ad on the Web site stated. The ads sought athletes and military men, while discouraging overweight candidates, and included photographs of the Stones. At the time, Stone claimed that he had been set up by a “very sick individual,” but he was forced to resign from Dole’s campaign. Stone acknowledged to me that the ads were authentic. “When that whole thing hit the fan in 1996, the reason I gave a blanket denial was that my grandparents were still alive,” he said. “I’m not guilty of hypocrisy. I’m a libertarian and a libertine.”

There’s nothing like a Republican sex addict and degenerate in American politics. If you’re a Democrat, you’re finished. If you’re a Republican, you get to keep your job, like David Vitter or, well, just like Roger Stone.

This is also an important detail. Stone’s deep ties to Paul Manafort were well known long before Trump decided to run for president.

Stone did not enter the government after Reagan won the election. Instead, he started a political-consulting and lobbying firm with several co-workers from the campaign. The name of the operation went through several iterations, but it was perhaps best known as Black, Manafort, Stone & Atwater, the latter being Lee Atwater, who had worked briefly in the Reagan White House’s political office. The partners made their money by charging blue-chip corporate clients such as Ronald Perelman’s MacAndrews & Forbes and Rupert Murdoch’s News Corp. large fees to lobby their former campaign colleagues, many of whom had moved into senior posts in the new Administration. There were also less savory clients—Zaire’s Mobuto Sese Seko, Angola’s unita rebels, Philippine President Ferdinand Marcos. Stone and his wife at the time, Ann, became famous for their lavish life style, which included a chauffeur-driven Mercedes and tailor-made clothes. They threw raucous parties for no reason or for almost no reason, like Calvin Coolidge’s birthday.

Special Counsel Robert Mueller’s office indicted Stone on Friday for making threats against a former associate. Why this didn’t happen a decade earlier is beyond me. Here, he does exactly the same thing and doesn’t lose his freedom, just his consulting gig.

On August 6th, someone whose voice sounded a great deal like Stone’s left a message on the office answering machine of Bernard Spitzer, the governor’s eighty-three-year-old father. The caller referred to a possible investigation of loans made by the elder Spitzer to his son’s campaigns. “If you resist this subpoena, you will be arrested and brought to Albany,” said the caller, who went on, “And there is not a goddam thing your phony, psycho, piece-of-shit son can do about it.” Private detectives hired by Bernard Spitzer traced the call to Stone’s wife’s telephone, but Stone, however implausibly, denied leaving the message. At first, he claimed that on the night of the call he had been attending the Broadway show “Frost/Nixon,” but there was no performance that evening. Stone also suggested that his landlord, a Spitzer supporter, had set him up, or that a standup comedian and impressionist had imitated his voice. As a result of the controversy, Stone had to relinquish his position with the State Senate Republicans.

If Stone were to spend the rest of his natural life in prison, I don’t think it would make up for the damage he has done to American politics. And I wouldn’t take anything he says at face value. Here is a man who will never atone for anything. Good riddance to this trash.