Shame on You, CNN 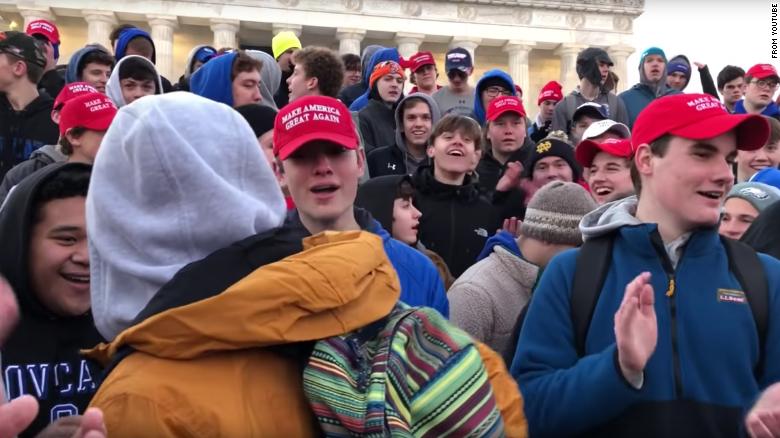 When the MAGA Teen Frenzy video was posted over the weekend, it triggered several cataclysmic events.

One, a bunch of people saw white, privileged kids acting horribly in public. That created a firestorm of outrage, and rightly so.

Two, the conservative media machine cranked itself up into overdrive, realizing that these were wealthy Catholic kids from a private school in Kentucky that were in danger of being roasted in public.

Three, figures throughout the mainstream media establishment caved into relentless pressure designed to change their framing and reaction to the story because they do not know how to react when they are being worked over by the manipulative, dishonest stylings of said conservative media.

If you read this article, you’ll miss three more important points that render the conservative defense of these kids as irrelevant:

The discussion over what happened between competing groups of people on the steps of the Lincoln Memorial on Friday doesn't appear to be going away anytime soon.

It all started that evening when someone posted an Instagram video of a tense encounter between a Native American elder and a group of Catholic high school students from Kentucky.

Twenty-four hours later, the video was everywhere: trending on social networks, splashed across news sites and airing on TV.

Below I can tell you just some of what the media completely missed. They could have sought this information out but they didn’t and it isn’t included in the CNN story in any substantive manner because they have folded up and gone into the fetal position because of the pressure put on them by conservatives. These are the same fringe-dwelling purveyors of hate who can be discredited again and again and again but keep getting their views into the mainstream. These are the people who went crazy trying to keep this from being seen for what it really was—a pro-Trump, racist mob acting out in public under the supervision of sympathetic adults who should have known better.

If any of these items are missing from the context of the story, consider the effectiveness of “working the refs” with regards to how the media has been manipulated here.

One, those same kids catcalled some women earlier in the day and their language was extraordinarily crude and violent.

Two, a conservative public relations firm was put into action, helping to defend these kids from their indefensible actions and is linked to House Majority Leader Mitch McConnell.

Three, Covington Catholic High School has a longstanding reputation for racist behavior at sporting events and there are people coming out of the woodwork to tell their own stories about being treated horribly whenever they have had to interact with the Covington Catholic student body over the years.

There are other testimonials and facts out there, and they actually support the visceral reaction most people had to the video when they first saw it because what you were seeing was a frenzied mob acting as if they were attending a Trump rally.

I find it implausible that, after running dozens and dozens of live feeds on every news channel showing Trump rallies that the media could not identify the behavior of these teens and put it into the context of what they have seen for themselves. The teens acted just like the adults have acted at Trump rallies. The same gestures, the same outrage, the same bigotry and over-the-top hatred for women and people of color. We’ve seen this played out, again and again, but the media just couldn’t connect the dots. Put Trump at a podium a hundred yards away and then tell me I’m wrong.

Everything you see in that video is something that has played out, again and again, at the rallies that Trump has held before and after accepting Russia’s help to steal the 2016 election.

In the next 22 months, look for the mainstream media to fall for this and twist itself into knots trying to avoid identifying those who support Trump’s white supremacy agenda as racists. They will be worked, repeatedly and expertly, by a conservative media establishment that is desperate to stop any and all who act in a racist manner from being labeled as such.

The media itself is built to frame stories as sympathetic to white people and is unusually hostile towards minorities and women, especially if they are asserting the same rights enjoyed by the teens seen in the original video. There are no African-American teens in this country who could assert that they had “every right to be there” and receive anything resembling a full-throated defense of their rights from conservatives. In the wake of countless incidents where African-Americans have been killed for simply being in the wrong place at the wrong time in front of the wrong white people, you cannot convince me that there isn’t a structural problem here. The media is conditioned to tell stories about how white kids have been wronged and how everyone else has to be up to no good and deserved whatever they got.

What’s actually true here? Your first reaction, to seeing the behavior of the teens and what their actions represent in the age of Trump, was the right one. They were being disrespectful, mean-spirited, and acting in a manner that was familiar to anyone who understands that the people who have power in this country can do whatever they want to those who don’t and get away with it. Women, people of color, and anyone who has been harassed, threatened, or abused in public know what they saw and they continue to refuse to be gaslit.

This is going to be a long, long election cycle and the media is not prepared for the manipulation that lies ahead. This incident proves that.