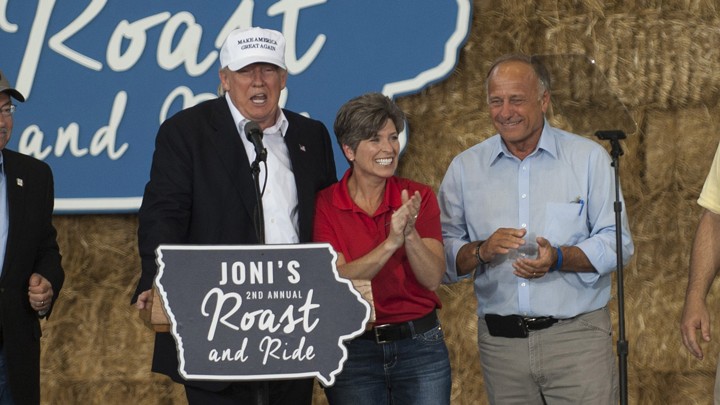 The White Nationalist Party lost a few committee memberships today in the House, but don’t worry. They’re still in charge of the country:

The Republican Party is doing a little soul searching. Last week, Representative Steve King of Iowa drew harsh rebukes from some members of his party for his defenses of white nationalism and white supremacy.

“White nationalist, white supremacist, Western civilization—how did that language become offensive?” King told the New York Times. “Why did I sit in classes teaching me about the merits of our history and our civilization?”

This was the most explicit expression of something that has been obvious for some time: King believes white people are not only superior to others, but supports the use of state power to preserve what he sees as white political and cultural power in the West.

As Christopher Mathias has ably documented, King’s remarks are the latest entry in a long list of similar statements, such as his declaration that “we can’t restore our civilization with other people’s babies,” that “cultural suicide by demographic transformation must end,” and that “we need to get our birth rates up or Europe will be entirely transformed.” He has called illegal immigration a “slow-motion holocaust,” language that echoes the neo-Nazi doctrine that non-white immigration is a form of “white genocide.” Last year he endorsed a candidate for mayor of Toronto who has a history of touting white-nationalist and anti-Semitic ideas.

Adam Serwer goes on to reason that, while it is good to see King staring at the end of his useful political life, it’s entirely another thing for the GOP to continue to prop up Trumpism and protect the president from being thrown out of office as well.

All of the pain the American people are feeling right now could end tomorrow if we had a functioning two party political system. All of the things Trump is doing to the country could be stopped if there was an ounce of courage in just a handful of the members of the United States Senate who are desperate to find a solution that does not turn the flying monkey base of the Republican Party against them.

We should stop waiting for them to wake up and realize what’s happening. They’re never going to do the right thing. There are no courageous leaders out there. Mitt Romneyshambles is not going to strap a couple of dozen brave young men to the roof of his car and lead anyone out of the wilderness. There is no popular appeal to decency happening, especially if it means risking the wrath of Ann Coulter. With so many Republicans in the Senate who are resigned to their fate, the business end of impeachment is never going to happen. If there was even a chance of that, it would have happened in the Spring of 2017 when it was readily apparent that Trump wasn’t going to “grow” into the job of president.

They’re all fucked, and they know it.

They know 2020 will end their hold on the Senate. They know another twenty or more seats in the House are going to disappear into the ether. If things continue the way they are going, it will be 1932 all over again. A generation will curse the Republican Party, en masse, and deny them any meaningful role in our nation’s political life.

Couldn’t happen to a worse bunch of racists.