Everything is About to Get Less Awful 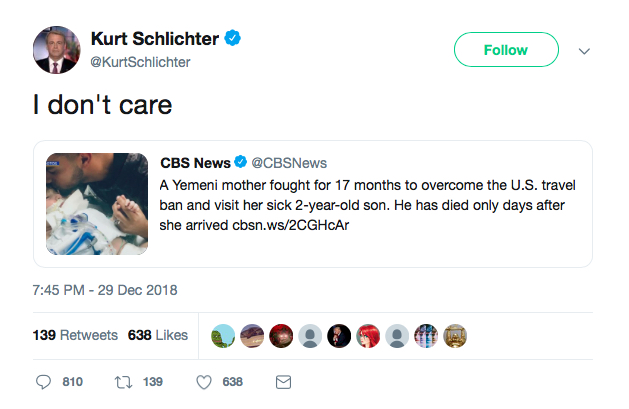 Last night, I almost wrote a very typical post about what a monster this asshole Kurt Schlichter is but I lost the plot and moved on.

Not caring about others is typical of the conservative mindset. They pride themselves on indifference to others. If you complain, you’re a snowflake or worse. If you call them on it, they retreat into their bankrupt ideology and their low-grade sociopathy. But if one of them drops dead, sees a severe reversal in fortune, or experiences life as we know it, well, you’re a monster if you don’t automatically rush to their aid. Poor creatures.

I don’t know how to live without some measure of consideration for others, and I don’t know how to care about people who celebrate their indifference to human suffering, so I leave it at that. Nothing Schlichter has to say about anything will ever matter again because he is incapable of living in a society where we’re supposed to have empathy and understanding. Writing about him is a fool’s errand because he wants you to condemn him, challenge him, or engage in a “debate” about the issues.

Yeah, to hell with that.

The road ahead should really be about how the Democratic Party saves this country from itself and from Trump. Those who shit on what this country used to be about are largely irrelevant now that a handful of prominent Democrats have the power of the subpoena and can investigate the vast corruption that has engulfed the Federal government. They are going to watch everything they tried to build unravel before the unflinching stare of the rule of law. I don’t care how many judges Trump throws out there, it won’t be enough.

In a few days, everything gets less awful.