Chris Cuomo Blames Both Sides When Republicans Do Evil Shit 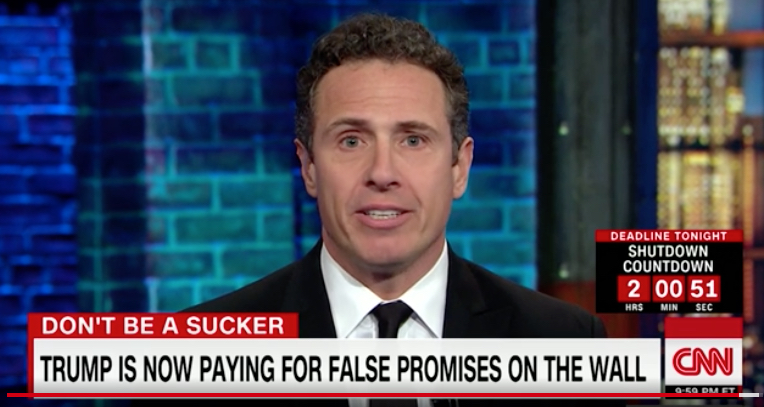 Chris Cuomo was quick to go on CNN and deflect criticism of the network by saying that “both sides” needed to come together.

Really? Which side is led by Trump? Which side still controls all three branches of government? The Democrats don’t take control of the house until January.

Who shut down the government? Trump.

Who believes that spending $5 billion dollars on a fake wall with metal slats is wasteful? Democrats.

Anyone who says “both sides” are at fault here knows that’s a con game. It allows whoever says it to be able to come back later and say, “I’m not biased, I go after both sides!” Cuomo is a useful idiot in that he just refuses to drop any pretense of being a so-called journalist. He even has the gall to tell “both parties” to “do your damned jobs.” As if that were possible at a time when the president can’t even function normally in public.

We live in an age where Fox’s propaganda is so bad it makes everyone else pretend to be more centrist and more middle of the road than they need to be. You’re never going to get anything out of Cuomo beyond this childish view that the party that isn’t in power can somehow dictate how things will work.

Democrats don’t own this shutdown. It’s Trump shutdown number three. It’s as simple as that. But Cuomo can’t hammer that home and inform people that this is the case. He has to look impartial.

It’s a huge pant load, though, because Trump and the Republicans are flirting with the devil and trying to destroy this country. No one ever says, “hey, maybe the GOP should stop being so extreme.”

At no point in our history would any Democrat would have been allowed to lead this country the way Trump has. All of these national security Republicans and all of these law and order conservatives are doing backflips every day, some right in front of Cuomo on his show, in order to escape the inevitable accountability that is coming in November of 2020.