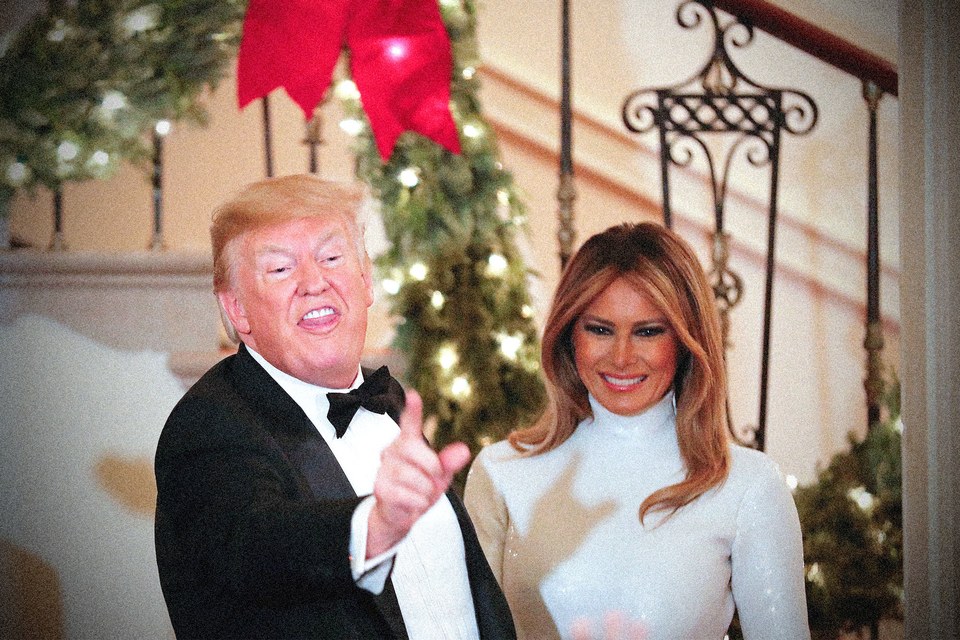 The inside scoop from Gabriel Sherman at Vanity Fair is that Trump is driving everyone crazy and he’s “acting like a nut.”

Donald Trump plans to head to Mar-a-Lago for a 16-day Christmas vacation starting Friday—and West Wing officials, remembering previous sojourns, are on edge at the prospect of the president spending two weeks unsupervised. As the Robert Mueller loop tightens around the president, his erratic behavior is causing alarm among his most senior staff. “The staff is fed up he’s acting like a nut. They can’t get him to stop tweeting,” a former official said.

Trump still has the ability to compartmentalize, and his mood has yo-yoed. Last night, he was jovial at a White House Christmas party attended by Don Jr. and Kimberly Guilfoyle, Ryan Zinke, Scott Walker, Chris Christie and Diamond and Silk. “He truly lives in separate worlds,” another former official observed. Trump’s advisers, however, recognize the precariousness of the current political moment. In one sign of the discontent in the West Wing, Communications Director Bill Shine has told friends that he’s thinking about signing a month-to-month lease for his Washington apartment, according to a source. “Bill is very frustrated,” a person familiar with his thinking said.

Trump’s freewheeling search to replace John Kelly as chief of staff unnerved Ivanka and Jared Kushner, three sources briefed on the discussions said. Trump, who was annoyed at Kushner after Kushner’s pick, Nick Ayers, turned down the job, told people he was seriously considering Citizens United president David Bossie. Kushner told people that giving Bossie the job would empower Bossie’s friend and co-author Corey Lewandowski,a longtime Kushner nemesis. (Last week, Bossie and Lewandowski met with Trump at the White House, a source said.) Bossie is also an ally of Steve Bannon, another Kushner enemy. “Jared got Steve Mnuchin and his buddies to tell Trump no way,” a source briefed on the discussions said. With few candidates available or willing to take the job, Kushner pushed Trump to name budget director Mick Mulvaney chief of staff. “They announced it as ‘acting’ but he’s chief. They only did that so if he and Trump hate each other they have an off-ramp,” the source said.

This is one of those stories that should infuriate people. This shit is not a game. It’s life or death. The President has troops on the battle field right now, a world wide military that is protecting our interests, an entire government here at home that is supposed to keep us safe, whether it is through monitoring our transportation systems, the food we eat, our environment, how people are cared for, the Veteran’s Administration, and on and on.

He’s making a few overpaid people who will never work in a respectable job again a little nuts? Hell, we’re all along for that ride, and it has been the two absolute shittiest years since the end of the Vietnam War.

Think of the collective hit that the country has taken since January 20, 2017. The toll on good people has been enormous. The fear that this madman has instilled in everyone who cares about foreign policy is without parallel—no one this unstable, including Nixon, has ever been allowed to lead this country for as long as Trump and do as much damage to our standing in the world. Whether we’re talking health care, encouraging actual Nazis to kill people, throwing babies in jail, setting up remote concentration camps for immigrants seeking political asylum, the willful destruction of planet, the coarsening of the way we talk to one another, or the way we live in this society—the Trump years are a malevolent trip down batshit crazy lane.

This Christmas, wish them all to hell. That’s where we’re living, Goddammit.