Trump Wants to Strip People of Their Citizenship 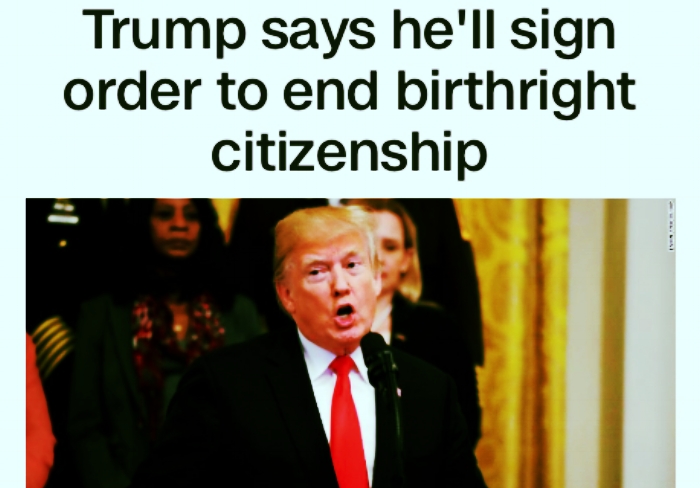 This won’t appeal to anyone other than hard-core racists and bigots, and that’s exactly the point:

President Donald Trump says he plans to sign an executive order that would end the right to citizenship for the children of non-citizens and unauthorized immigrants born on US soil.

It's unclear if the President has the authority to strip citizenship of those born in the US with an executive order, and he did not say when he would sign the order in the clip released by Axios. CNN has reached out to the White House for comment.

"We're the only country in the world where a person comes in, has a baby, and the baby is essentially a citizen of the United States for 85 years with all of those benefits," Trump said in an interview for "Axios on HBO."

Several other countries, including Canada, have a policy of birthright citizenship, according to an analysis by the Center for Immigration Studies, which advocates for reducing immigration.

"It was always told to me that you needed a constitutional amendment. Guess what? You don't," he said, adding that he has run it by his counsel. "You can definitely do it with an act of Congress. But now they're saying I can do it just with an executive order," Trump said.

They don’t even bother to call him a liar anymore, do they? Trump makes some crazy, half-assed claim and it always turns out to be false because he does not know anything. And then, pow! We go straight from some monstrous policy move to a bizarre claim about changing laws with executive order.

Back in the day, doing anything with an executive order was tyranny, according to the same people who now cheer when Trump issues stupid ones. This is one more reason to conclude that Trump is only going to get worse and that people have to organize to effect change.

We need regime change in our own country now, thanks to this bunch.