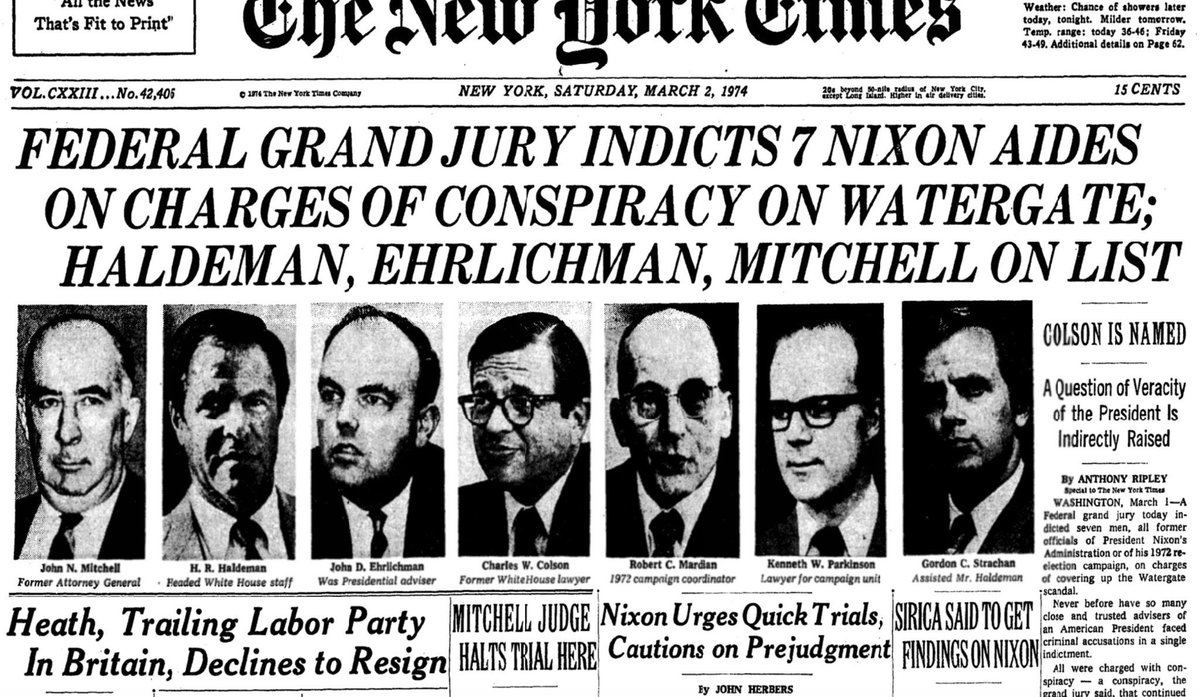 In 1974, a Federal Grand Jury laid out the “roadmap” necessary for the Judiciary Committee in the House of Representatives to take an indictment of a sitting president and turn it into the basis for impeachment. This important historical document serves as a wakeup call to the most vile and corrupt president the country has ever known:

U.S. archivists on Wednesday revealed one of the last great secrets of the Watergate investigation — the backbone of a long-sealed report used by prosecutor Leon Jaworski to send Congress the evidence in the legal case against President Richard M. Nixon.

The release of the referral — delivered in 1974 as impeachment proceedings were being weighed — came after a former member of Nixon’s defense team and three prominent legal analysts filed separate lawsuits seeking its unsealing after more than four decades under grand jury secrecy rules. The legal analysts argued the report could offer a precedent and guide for special counsel Robert S. Mueller III as his office addresses its present-day challenge on whether, and if so, how to make public findings from its investigation into Russia’s interference in the 2016 election, including any that directly involve President Trump.

The legal specialists said they and Watergate veterans sought to have the Jaworski report made public because of the historical parallels they see to the current probe and the report’s potential to serve as a counterexample to the independent counsel Ken Starr's report before President Bill Clinton’s impeachment.

The 453-page Starr report, written in 1998, deepened partisan divisions when its graphic detail and legal conclusions about Clinton’s affair with Monica Lewinsky were immediately made public by House Republicans, who suffered an electoral backlash.

By contrast, the reputation of Jaworski’s report has fared far better, even as its bare-bones form remained a mystery. The Jaworski report is known colloquially known as the “Sirica road map,” for then-Chief U.S. District Judge John J. Sirica, who approved its creation and transmission to lawmakers.

“There were no comments, no interpretations and not a word or phrase of accusatory nature. The ‘Road Map’ was simply that — a series of guideposts if the House Judiciary Committee wished to follow them,” the late Jaworski wrote in his 1976 memoir, “The Right and the Power: The Prosecution of Watergate.”
[...]
The road map consists of a two-page summary, followed by 53 numbered statements, supported by 97 documents including interviews and tapes, according to information that the National Archives turned over to Howell.

This release speaks to how Robert Mueller III might carry out his work in the weeks and months ahead. His Special Counsel’s office is clearly prepared to release some major bombshells after the mid-term elections next Tuesday. There is no finer example than the carefully parsed and organized evidence presented in the document released today.

It is a tour de force of simple language and logic, so clearly composed and written that it should be taught in writing classes. And given that Mueller is a no-nonsense individual, a complete breakdown of the crimes of Donald Trump and his lackeys written in such a style might run to several thousand pages (we just don’t know). It might take several reports and several years to get through the mountain of malfeasance that lies before us.

When it’s all over, any Senator who refuses to vote to remove Trump might be staring into the abyss of public opinion. It’s one thing for Trump to spew lies and try to obstruct justice by claiming this is all a “witch hunt.” It’s another thing for the so-called witch hunt to deliver up convicted felons, mountains of bank statements, reams of compelling evidence, and whatever else Mueller and his team have been sitting on all year.

There are probably only a dozen Senators who are simply unbeatable in their deeply red states. The rest could be toppled by an enraged electorate who will have a crack at most of them in 2020 and 2022. Don’t bet that they will become Trump’s loyal firewall. At some point, the levee has to break.