Scott Wagner is an Unhinged Maniac and a Republican 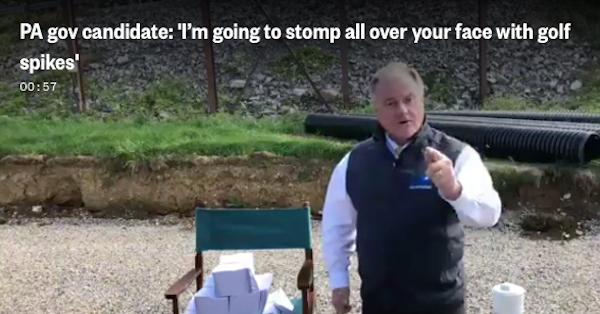 If any Democrat anywhere said what Pennsylvania Republican Scott Wagner said on this video, the pearls would be clutched and every fainting couch would be adorned with a shocked and mortified pundit.

You know what? Fuck your feelings, Scott Wagner.

Civility police will be out in force, trying to make the anger of women, minorities, decent Americans, and everyone who isn’t Scott Wagner something to be shamed and held in check. Your anger is real, and it will motivate you to throw Republicans out of office wherever you are in this great nation. Calls for civility are just a plea from GOP operatives for Democrats to stop using effective rhetoric to win every argument and motivate everyone who is wavering.

What campaign operative allowed his or her candidate to go stand in what looks like a construction site where serial killers dump bodies and make a howlingly stupid video replete with empty threats, cheap props, and old drainpipes? The optics on this are so bad, I can’t even imagine the need to make a satire of it. How do you top “golf spikes” stomping on someone’s face? How do you make it funnier? With a tighter vest and wilder hair? Spittle flying in the breeze? A yipping terrier taking a shit on a picture of Saul Alinsky holding baby Hillary next to Fidel Castro?

Remember, there was another human being filming this who didn’t stop, wave their arms in the air, and tell this jackass to stop losing his mud.

America needs to cut Trumpism from the body politic. This guy shouldn’t just be defeated. He should be held up as an example of what happens when a whole country loses its Goddamned mind.