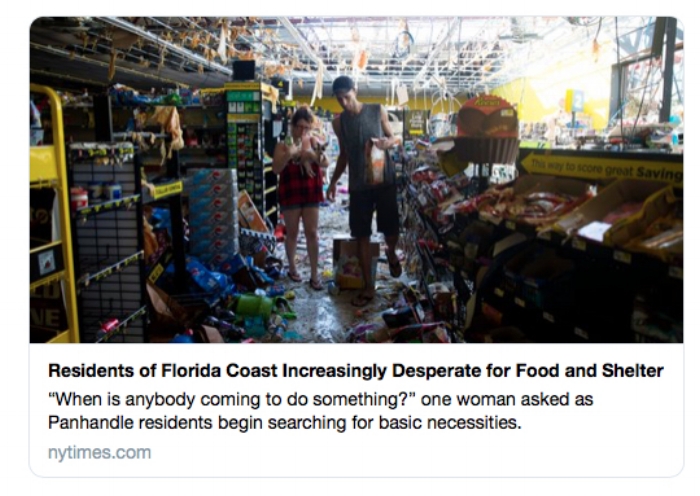 Did Trump schedule a rally near you? If not, then no one is coming to help:

It was two days after Hurricane Michael, and Eddie Foster was pushing his mother in a wheelchair down a thoroughly smashed street, his face creased with a concentrated dose of the frustration and fear that has afflicted much of the Florida Panhandle since the brutal storm turned its coast to rubble.

He was in a working-class neighborhood called Millville, where many residents said they were becoming desperate for even basic necessities. Mr. Foster, 60, and his 99-year-old mother had no car, no electricity. The food had spoiled in his refrigerator. The storm had ripped off large sections of his roof. He had no working plumbing to flush with. No water to drink. And as of Friday afternoon, he had seen no sign of government help.

This was the problem that government officials were racing to solve on Friday, as desperation grew in and around Panama City under a burning sun. Long lines formed for gas and food, and across the battered coastline, those who were poor, trapped and isolated sent out pleas for help.

Trump’s FEMA chief has so many ethical problems, it’s a wonder he still has a job (come to think of it, there are at least a dozen cabinet officials who are in just as bad of shape). People living in the hurricane-ravaged areas should remember one thing—when the GOP is in charge of things, corruption and greed come before everything else.

Complicating everything is the fact that there’s a governor’s race in Florida, and the current governor is running for a Senate seat. Add to that the situational clusterfuck that is the Trump Regime, and you have everyone running around, looking for a way to blame this catastrophe on Democrats.