The Stumblebum in Chief 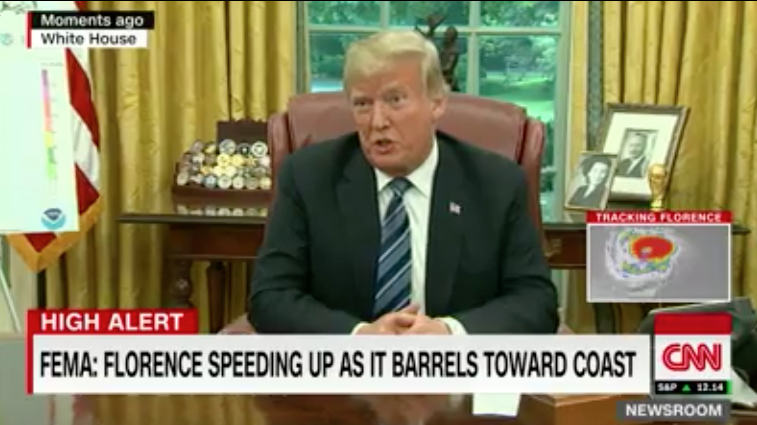 Trump received a “briefing” today about Hurricane Florence, and then proceeded to put his foot in his mouth. He said said the way that he and his vast army of incompetent fools managed the emergency situation in Puerto Rico last year was an "incredible unsung success.” Maybe doing that was a little foolish because reminding everyone how nearly three thousand American citizens died on your watch because you didn’t have a clue, a plan, or anyone running the response agencies tends to drive home the fact that you need to actually fucking govern the country while you’re ripping it off.

Oh, but then the bottom fell out of everything tonight:

Sen. Jeff Merkley released a document Tuesday showing a transfer of nearly $10 million from the Federal Emergency Management Agency to US Immigration and Customs Enforcement, and accused President Donald Trump's administration of diverting funds from hurricane relief just as hurricane season was starting.

However, the document from the Department of Homeland Security specifically mentions the money would come from the agency's budgets for travel, training, public engagement and information technology work. The department denies that the money came from disaster relief funding.

Merkley, a Democrat from Oregon, said on MSNBC's "Rachel Maddow Show" that the administration is taking money from "response and recovery" and "working hard to find funds for additional detention camps."

"I would dispute the statement that this has no bearing on ... addressing the challenges from hurricanes," Merkley said.

FEMA, which is now run by hideous, screaming jackals who support the president like the last handful of overweight gefreiters in Hitler’s bunker in Berlin, put out a dutiful statement claiming that this shell game really didn’t rob Peter to pay Paul. And yet, right there on the documents that Merkley presented, was proof that about ten million dollars has been moved from FEMA response operations into a fund where ICE can use it to throw babies in jail.

Hey, North Carolina and South Carolina—you voted for this asshole. Bend over, and enjoy what’s coming. Maybe next time electing a president who makes liberal tears flow will be a lot less important than ensuring that you have roofs, walls, drinking water and a place to dry off for the next month.