The Day That Broke The Senate 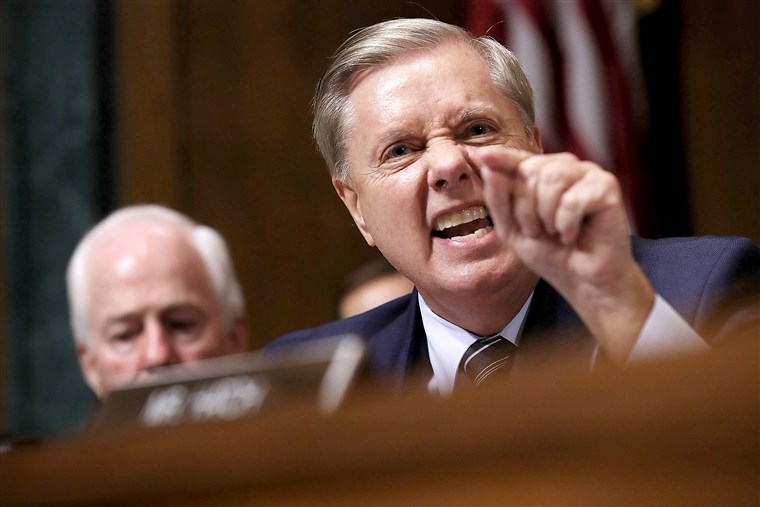 We have been subjected to a complete and utter shitshow since Inauguration Day, 2017. The entire government has been suborned by a corrupt celebrity pussy grabber who has no acquaintance with the truth. One of his loyal subjects is Lindsey Graham, Senator from the great state of Unhinged. You know how they make a lowlight reel for guys who have hit the big time in sports as a joke? Today’s videos of Graham coming unglued could constitute the lowlight reel to end all time. Any Democrat who runs against him in the future and doesn’t use video shot today is committing political malpractice.

The Senate is now a shambles, thanks to a decision from the Republican Party to put Trump over country. Normal is a long, long ways away. These clowns can’t even stage a one car parade if you spotted them the whole thing and left instructions not to alienate every woman alive. What a farce, Bart O’Kavanaugh. What a farce, indeed.

Kavanaugh’s tears elicited a fuck you from me that comes from the heart. You’re supposed to cry for what you did and how it hurt someone else, dumbass. You don’t get to cry because your judge career just went tits up. Maybe if you weren’t already an untreated alcoholic we’d have some basis of understanding you (correct me if I’m wrong, but why hasn’t anyone bothered to find out if Kavanaugh has ever been treated for his alcoholism?).

In the Trump era, there are Others, and they don’t matter to privileged white men. This can’t end soon enough.

I do not see where we go from here. The GOP will force Kavanaugh onto the Supreme Court, and then, God willing, decent people are going to have to find a way to remove him after the fact. Women are going to have to vote for Democrats and then hold their feet to the fire. This whole abomination of a supposed government cannot remain like this much longer or the republic will have to be put back together with baling wire, glue, and the concerted effort of everyone capable of repairing it. In the next five years, you could see the Supreme Court expanded to 11 justices, easily, just to mitigate the damage of the Trump era. These people behind him have constructed something so vicious and depraved, the only good that can come out of it is the destruction what they made.

You will see their works, and you will know that they have to be pulled down. Whatever these monsters are building is a temporary obscenity, a government fueled by ignorance, fraud, and immaturity.

I don’t know how anyone could hold their head up and not be proud of Dr. Christine Blasey Ford and not want to vote Democrat for the rest of their natural lives. To withstand this evil takes a courage that reveals itself every day.

As I’ve said before, Goddamn these people on the other side. I don’t understand them, I don’t want to know what their lives are like, and I don’t know why they think ruining the country’s institutions gets them anything worth having.