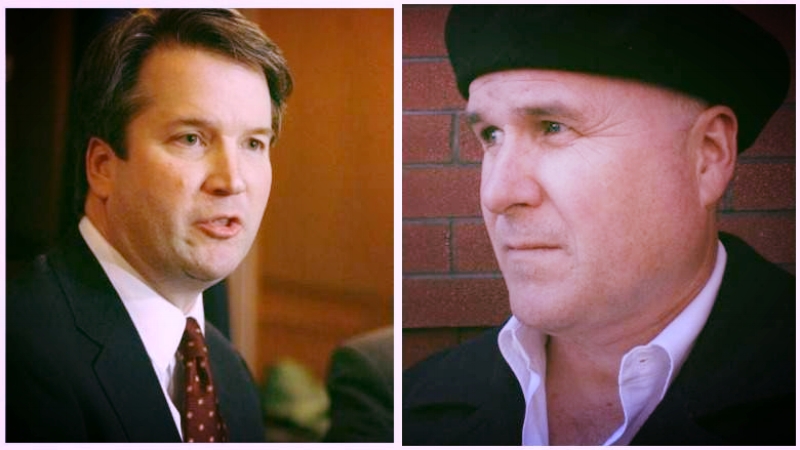 Brett Kavanaugh and Mark Judge are at the center of a larger story right now. Namely, who is the bigger douchebag and why do they get to be part of the elite in this country? The world they come from sounds like something out of a bad movie:

President Donald Trump's nominee for the Supreme Court, Brett Kavanaugh, is being accused of sexually and physically assaulting a 15-year-old girl at a party during his high school years.

Kavanaugh has repeatedly denied the allegations, but his accuser, Christine Blasey Ford, says there was one other person in the room when the alleged incident took place: Kavanaugh's then-classmate, Mark Judge.

The fate of Kavanaugh's nomination is hanging in the balance as Republicans and Democrats debate allowing a full investigation to take place.

Judge, a journalist and filmmaker, has also denied that the incident took place.

"It's just absolutely nuts. I never saw Brett act that way," Judge told The Weekly Standard in an interview on Friday. CNN has been unable to reach Judge for comment despite repeated attempts.

Now that Judge's recollection of the alleged event could become a focal point for all those looking into the accusation, flags have been raised regarding his own past writings.

Judge wrote the book "Wasted: Tales of a Gen X Drunk," where he details his experiences of extensive drinking while attending Georgetown Preparatory School.

Judge writes that he is "shocked" about what he got away with in high school -- recalling beach parties that hundreds of people would attend.

At another point he describes his high school as "positively swimming in alcohol."

Judge also references a "Bart O'Kavanaugh," who he writes vomited in someone's car. It has not been confirmed whether this is a reference to Kavanaugh.

The impression I get is that they are both a couple of half-bright liars, used to having their way with the world. When a Christine Blasey Ford shows up, it shatters the veneer they have tried to place over how they have acted their whole lives. In order to be palatable to the conservative movement, they have to have the moral authority to tell women what to do with their bodies. You can’t admit to a lifetime of being a serial abuser or harasser of women with an early history of sexual assaults and frat-boy thuggery if you want to be in charge of everything, right?

Both of these men are exactly why we ended up with Trump. He is the template for how privileged white men have been able to fail upwards in this country since it was founded.