Reporter Dan Eggen has a great piece out today about the efforts behind the scenes to prop up the nearly-obliterated reputation of Judge Brett Kavanaugh. It certainly appears to me that Kavanaugh felt it was beneath him to give the people trying to help him some sense of what was in store for them when they were going to have to go to bat for him in this process. By refusing to tell them straight what it was that could sink his nomination, he effectively cut them off at the knees. I wouldn’t be surprised to see these people leak damaging information in retaliation if Kavanaugh fails to be confirmed. They are going to want to destroy him in order to show others that they need to play ball. 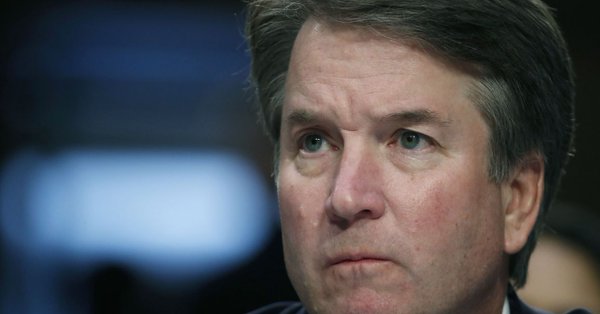 What strikes me about all of this is that no Democrat anywhere would ever be allowed to refuse to talk about their private life. We’re seeing this in Texas right now. Beto O’Rourke is having ads run against him because of a drunk driving incident in the last century. What you did in the Nineties and Eighties isn’t going to go away, man. And, with regards to Kavanaugh, it doesn’t matter if he was in high school. The Republicans love it when a juvenile is tried as an adult for their crimes; they love to see young African-American men blown away or sent to prison for seventeen life sentences. It’s this curious embrace of the rule of law that has them all hot and bothered to establish Kavanaugh on the Supreme Court where he can cover their Law and Order loving flanks.

What more do you have to say? This guy was a pervert’s pervert in his day job working for Ken Starr. And you’re telling me he should be trusted? Really?

There’s no way any Democrat would be allowed to proceed to a vote based on what we already know about Kavanaugh. Grassley, Hatch and McConnell would have burned down the Senate and thrown the desks into a pile by now. We all know this. We know they are just fucking hypocrites, through and through. They only care about getting a win that causes pain to others. If Kavanaugh had been Bill Clinton’s Staff Secretary, you’d already have every piece of paper he ever touched in a searchable database, ready for the perusal of a few thousand wannabe sleuths.

My guess is that they’re going to hang him for not telling them what they needed to know. He should have been more candid about his private life. If they go to war for him, they’re going to be hoisted on their own petard if someone somewhere has a critical piece of evidence that makes Kavanaugh look like a rapey, flaming douchebag.