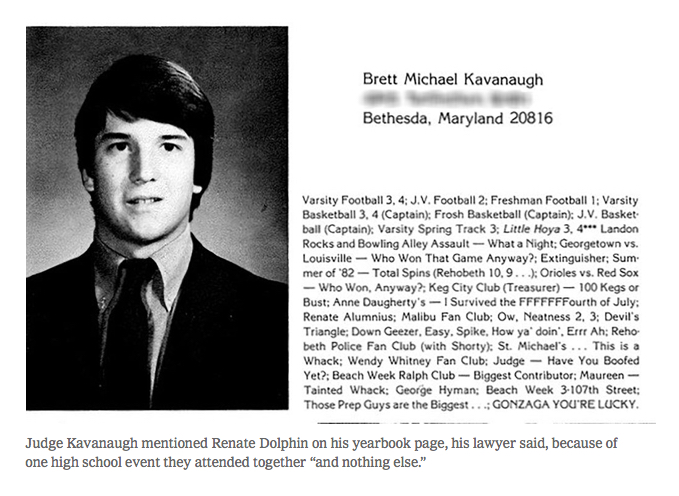 Evidence that Brett Kavanaugh really doesn’t like women or respect them can be found on his high school yearbook page. I mean, honestly. What psychopath comes up with this stuff and has the nerve to make it a permanent statement of his own misogyny?

A woman who signed a letter supporting Brett Kavanaugh after he was accused of sexual assault earlier this month called revelations from his high school yearbook that showed he and his friends reportedly boasted about their supposed conquests with her "hurtful," The New York Times reported Monday.

Renate Schroeder Dolphin joined 64 other women this month who signed a letter to the Senate Judiciary Committee saying they knew the Supreme Court nominee during their high school years and that "he has behaved honorably and treated women with respect."

However, Kavanaugh included "Renate Alumnius" as an entry in his high school yearbook page, and two of Kavanaugh's classmates told the Times the mentions of "Renate" were part of the high school football players' unsubstantiated boasting about their conquests.

When Dolphin, who attended a nearby Catholic girls' school and was then known as Renate Schroeder, signed the September 14 letter, the Times reports, she wasn't aware of the "Renate" yearbook references about herself on the pages of Kavanaugh and his football teammates.

This woman was clearly a supporter and was willing to sign her name to a document that vouched for his character. And yet, right there, in black and white, he all but boasted of how he had his way with her. The phrase “Renate Alumnius” is a coded reference (one of many depicted above) that should be explained in detail.

Kavanaugh, and numerous other male students, used that phrase to lay claim to the fact that they had sex with her. And now that she has figured it out, all these years later, she is justifiably angry and horrified:

Kavanaugh was one of 13 graduating seniors who referred to Dolphin in some way on their personal pages, the Times reports.

Sean Hagan, who was a Georgetown Prep student at the time, told the Times that Kavanaugh and his teammates "were very disrespectful, at least verbally, with Renate," and said, "I can't express how disgusted I am with them, then and now."

Hagan and another classmate, who requested anonymity, told the Times that Dolphin was a subject of their boasting. They said Kavanaugh and his friends wanted to memorialize their supposed conquests with the yearbook references.

Hagan said Dolphin "should be offended," and told the Times he was "completely astounded" when he saw she had signed the letter in support of Kavanaugh.

Beth Wilkinson and Alexandra Walsh, lawyers for Kavanaugh, told CNN in a statement that Kavanaugh "was friends with Renate Dolphin in high school. He admired her very much then, and he admires her to this day."

"They had no other such encounter. The language from Judge Kavanaugh's high school yearbook refers to the fact that he and Ms. Dolphin attended that one high school event together and nothing else."

Dolphin told the Times through her lawyer, "I think Brett must have me confused with someone else, because I never kissed him."

Four of the players who were pictured with Judge Kavanaugh in the photo captioned "Renate Alumni" told the Times it was simply a reference to "innocent dates" or going to dances with Dolphin. DeLancey Davis, Tom Kane, Tim Gaudette and Don Urgo Jr. said in a statement to the Times that they had "never bragged about" sexual contact or anything like that with Dolphin.

Michael Walsh, another student at Georgetown Prep, also wrote "Renate Alumnus" on his yearbook page, the Times reports. He also included a short poem, "You need a date / and it's getting late / so don't hesitate / to call Renate."

They sound like the best and the brightest, don’t they? Such honorable, respectful gentlemen.

I think what gets to me about this is that they lived in this bubble, and, with adults all around them, they were allowed to conduct themselves in this manner without any consequences. Who bought all of that beer? Who drove them around? Who gave them cars and money and access to places most kinds living in the District of Columbia could only dream of? Less than an hour away, kids in Baltimore didn’t have this kind of life. They grew up very differently than Brett Kavanaugh and the monsters who went to school with him.

What the hell kind of a country still lets these privileged pukes get away with this shit? Who is Kavanaugh to think that he deserves to sit on the Supreme Court and pass judgement over women and their right to choose?