These People Remind Me of Lyndon LaRouche 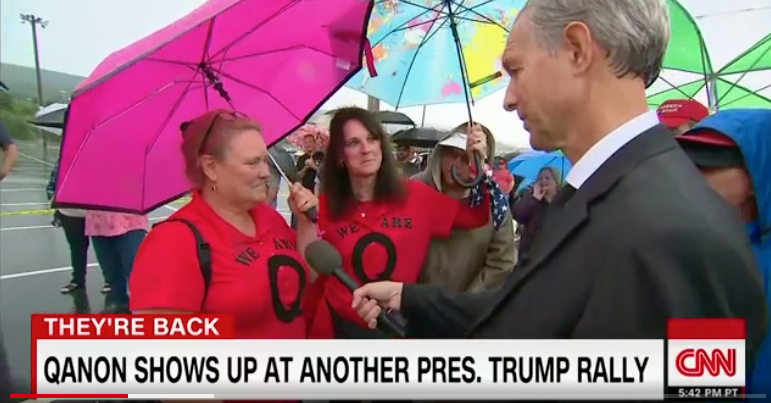 It looks like CNN is worked up about QANON or whatever they call themselves. They are a lunatic fringe with catchy T-shirts. You know who else had all of those trimmings and more? The followers of Lyndon LaRouche:

Lyndon LaRouche said Wednesday that he represents "the forgotten majority" and characterized his critics as being insane, pro-Soviet or linked to an international drug lobby.

He contended also that President Reagan's chief aide, Donald T. Regan, should be in jail and dismissed as lies charges by groups such as the Anti-Defamation League and the AFL-CIO that he is an "anti-Semite" and a "fascist."

"I know of no case of any attack on me, which has been published or which I have noticed in the news media, which did not originate with the drug lobby or with the Soviet operation," he said during an appearance at the National Press Club.

The session ended with LaRouche's cutting off an NBC correspondent who had asked him about the finances of his organization of a few thousand people worldwide.

"You guys (NBC) are a bunch of liars," said LaRouche, in response to a network report Tuesday that quoted sources as saying he is being investigated by the Internal Revenue Service. "How could I talk to a drug pusher like you."

LaRouche, 63, a three-time presidential candidate on the political fringe, surged into the national spotlight last month when two of his followers scored upsets in the Illinois primary by winning the Democratic nominations for lieutenant governor and secretary of state.

He said that his followers in Illinois had drawn support from "the forgotten majority"--farmers, blue-collar households and blacks. He added that the victories showed that average Americans do not believe their government and the news media and that they want him "to stick it to them in Washington."

Most LaRouche candidates run on the ticket of the National Democratic Policy Committee, which has no connection with the Democratic Party.

Standing before about 100 reporters and photographers, LaRouche repeatedly accused the Soviet government, the British government, drug dealers, international bankers and financial institutions of being involved in worldwide conspiracies.

This moment in American history would be echoed in 2015 when Trump rode down the escalator and gave his views to the media. They should have laughed at him, turned everything off, and covered the primary like a normal society would, and the Republicans should have told Trump to go pound sand and get off their debate stages. This would have consigned the ridiculous and racist views of Trump to the ash heap of history, which is where they belong. The proper way to handle a maniacal fascist freak and his followers is to give them a moment where they can humiliate themselves and then you don't have to cover them anymore. You let them speak their piece, and then you turn off the cameras.

Were it not for the fact that outlets like CNN are so badly managed and run, they could have survived without all that cash they made covering every obscene rally like it was actually news. In point of fact, every Trump rally resembles the darkest ramblings of Lyndon LaRouche except they are noticeably dumber and harder to follow.

It's as if no one understands what trolling is anymore. The media is too stupid and too desperate for revenue in order to shut the cameras off so they roll tape and expose more and more Americans to a hateful fringe of dangerous ideas that could, in fact, get more than just another pizza parlor shot to hell.

Christ, the last thing you want to do is legitimize the kooks. That's what CNN is doing--they're making QANON seem like something your batshit crazy uncle liked on Facebook before his account was hacked.