The Atrocities Keep Piling Up 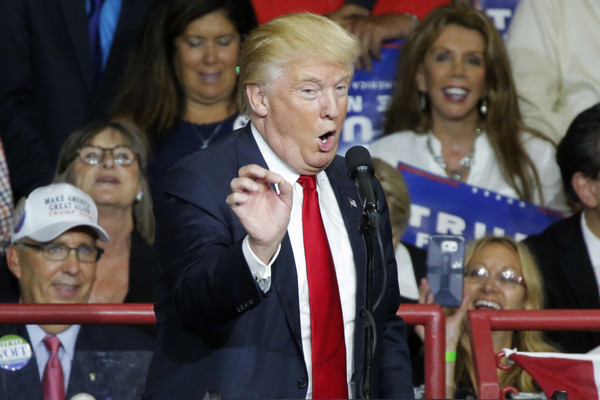 Vice takes a look at the Trump supporters who are only showing up to see if someone gets their ass kicked:

The coral of Tampa's Florida State Fairgrounds entrance arcs against an ominously graying Tuesday evening sky. Everyone waits for Donald Trump outside, even though it smells like rain. The Secret Service checkpoint doesn't help, choking admission to the 10,500-seat Expo Hall, but outside is where you want to be in any case. It's where the cameras aren't confined to a pen. It's where the enemy is. It's why we're here.

Trump knows this. He understands the value of outside. When he arrives, he mentions the thousands of people outside the gate for him (there aren't) watching giant-screen TVs (there are none). And, anyway, not much will happen inside. Everyone knows what the Trump show looks like at this point—grievance after formless grievance, with no policy agenda in sight. GOP gubernatorial aspirant Ron DeSantis is introduced as someone who likes Trump, takes the stage to demonstrate his approval of Trump, then slinks off before his speech becomes dangerously long or memorable. Then the most powerful man on the planet whines about everything unfair to him, an audience whose go-to insult is "snowflake" shares in his victimhood, and, if they're very lucky, go off to find those responsible outside.

The press knows the ticket lies outside too. The fact-checkers can do their jobs from a YouTube stream. Inside, people sit on bleachers, not free to move or rave or joke around. Colors wash out in the artificial light, and once the speech starts, the cameras and recorders are supposed to remain within the press pen. Besides, that way the audience always knows where to find the treasonous media on the way out.

Even the Trump fans understand that inside is boring. The rear corners of arena seating never fill; a standing room large enough to accommodate the crowd outside five times over remains empty. Fifteen minutes in, people start to exit, because this speech is like all the rest of them. A cheerful bearded man in a USA replica baseball jersey and Trump socks stops on the way out to explain to me why he's leaving and gives the same answer as everyone else:

"To beat the traffic."

The real story is the collapse of Trump's popular support, his dismal job approval ratings, his inability to help candidates win their elections, the terrible policies he has enacted, the complicity of the Republican-controlled Congress, the corruption that is endemic to the regime that he leads, and the babies he threw in jail to maintain the support of his base.

When the media fails to cover any of those items, don't forget that Russia helped Trump steal the election, he has committed obstruction of justice in plain sight multiple times, and the Democratic Party is poised to seize control of the Legislative branch of the Federal government in about 90 days.

Stories like this pierce the veil that covers this illegitimate presidency--the emperor ain't wearing a Goddamned thing and the whole country is being sold down the river because our working media complex is afraid to:

1. Call Trump a liar to his face

2. Stop attending the bullshit briefings that spread lies and misinformation

They are revenue-challenged, and they need the cash more than the American people need to hear the truth. They are failing to act in the interests of the public. When Walter Cronkite gave his opinion that the war in Vietnam could not be won, the country took note. If any living anchor person on the evening news said anything as remotely mild as this, the indifference of the American people would be overwhelming and would demonstrate just how well and truly fucked we are because Trump has been allowed to define the rules. The media needs to define what is, and what is not true, and they can't even do that.

Is the "rally" full? No, then the president is a liar when he says the rally is full.