Tad Devine is a Sleazebag 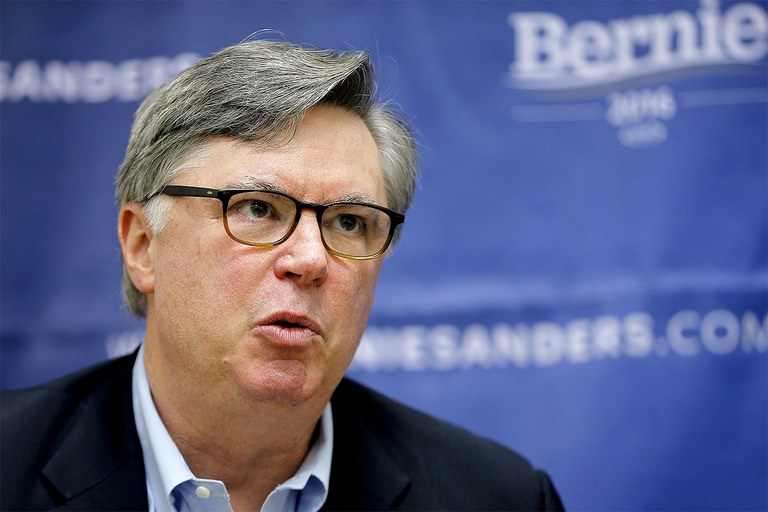 Tad Devine helped Bernie Sanders wound the Democratic Party before the general election in 2016 was working for Russia and against the interests of the United States:

Thanks to Robert S. Mueller III’s prosecution of Paul Manafort, the former Trump campaign chairman and sometime business associate of Devine, we now have an unusual glimpse into the role the Democratic ad man had in electing and preserving the power of Ukraine’s Viktor Yanukovych, a crooked pro-Putin autocrat. Though American political consultants routinely rake in cash from foreign leaders — even shady ones — Devine’s seamless pivot from advocate for antidemocratic thug to champion of a principled democratic reformer shows extraordinary flexibility.

Yanukovych’s fraudulent election in 2004 as Ukraine’s president was invalidated, but not before his opponent was poisoned by dioxin. Yet testimony in the Manafort trial and documents released by Manafort’s lawyers show Devine helped Manafort on Yanukovych’s comeback as prime minister in 2006 and successful presidential run in 2010. Devine produced a memo of advice for Yanukovych’s party in 2012, even though by then Yanukovych had thrown the leading opposition politician in jail and had built a $100 million mansion — complete with zoo, helipad, golf course and replica galleon on an artificial lake — while his people were, in Devine’s own words, struggling with “joblessness, hunger and the general despair.”

Devine was all to happy to pretend to be "principled" in order to help Sanders drag out his hopeless fight against Hillary Clinton. He was part of a small group of consultants that prolonged the primary as long as humanly possible in order to force Clinton to spend time and badly needed resources. If she had been able to pivot to the general campaign sooner, could it have made a difference against the Russian onslaught? Maybe, we'll never know.

If anything, the Manafort trial is showing us who Devine really is, which makes me wonder if Sanders is going to keep working with him:

As Sanders likes to say, let me be clear: Manafort is the one on trial for money laundering and other crimes. Devine is a witness for the prosecution; as prosecutors pointed out when he testified Tuesday, he wasn’t the one with a bank account in Cyprus. There is no hint Devine did anything illegal — only cynical.

Manafort, who worked for the world’s sleazebags, made no pretense of scruples. But Devine was the guy molding the Sanders campaign as a righteous, everyman’s insurgency against the corrupt, wealthy establishment. Devine, who had worked on Sanders’s first campaign for the Senate in 2006 (the same year he plotted Yanukovych’s comeback), earned more than $5 million for his firm from the populist Sanders presidential campaign and at least $10 million in commissions split with another firm, according to a Slate tally.

Devine wrote with Manafort a January 2006 memo when Russia was cutting off gas supplies to Ukraine, showing Yanukovych how to ride his “good neighbor” policy toward Russia to victory. He became prime minister. Devine drafted a presidential victory speech for Yanukovych in February 2010 (“We are all Ukrainians first,” the American wrote) and later that year wrote talking points showing how Yanukovych and his party could attack the opposition.

By April 2012, Yanukovych had jailed his opponent and become an international pariah. Devine told Gates, “I regret that we will not be able to work with you” on Ukraine’s parliamentary elections. But four months later, Devine wrote a strategy memo for Manafort. “The number of people who admit they are having difficulty feeding their family throughout Ukraine today is stunning,” he wrote, urging Yanukovych to “signal” his concern and calling for his party to attack. “I would recommend a roughly 3:1 negative to positive ratio in the advertising,” he wrote.

Yeah, that's the guy who helped Sanders poison the well and pave the way for Trump. What a bucket of sleaze. No Democrat should ever employ him and no one should listen to what he has to say about the elites and the corrupting influence of money in our politics.