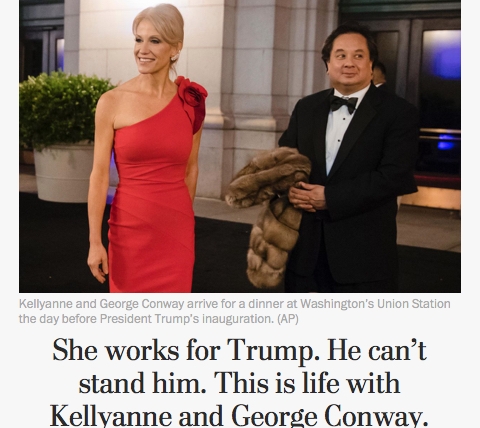 The Washington Post is out with a big story about Kellyanne and George Conway, and it is how people who engage in terrible behavior in the public sphere end up being normalized and accepted. This story is written for a select few who are concerned that, when the Trump Regime is driven from power, it might be impossible for Kellyanne to make a living. You can see that in the language that people use when discussing current Trump supporters and former associates. They are to be shunned, you see, and someone wants to trade a little access for the favor of letting the Conways continue to work their schemes and collect their fees.

Few Americans really know these people or care about them, but they are leftovers from the 1990s and the demonization of the Clintons. They are liars and grifters, and it doesn't matter if one of them supports Trump and one of them doesn't--flip their loyalties around, and they'll just find a way to sell themselves to someone else and make a living.

These articles are garbage, but they feed a machine that the Washington Post needs. Trade a little access, normalize some vicious scum, and watch how CNN finds a way to give Kellyanne a job in three years time, commenting on Democrats and whomever else.

This is a garbage article, filled with just enough to keep the Beltway crowd interested. Our political systems and the institutions that our elites are supposed to protect are a complete and utter shit sandwich and these people want to play games with people's lives. What a horror show.