Lordy I Hope There Are Sex Tapes 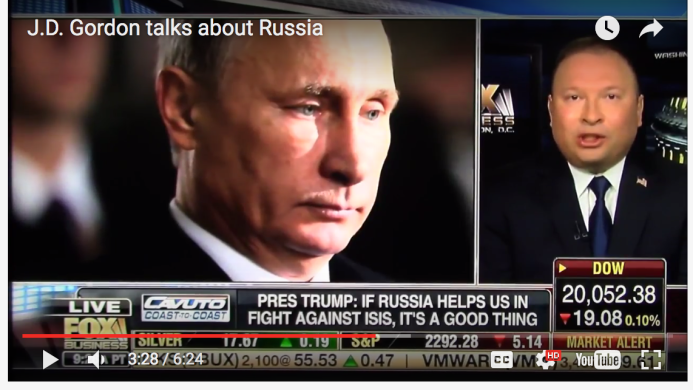 The spherical blob on the right is one J. D. Gordon, and he's up to his disappearing chin in the saga of the red haired vixen who came to America to infiltrate the American gun nut lobby on behalf of Russian intelligence:

Maria Butina, the Russian gun-rights activist who was charged last month with working as anunregistered agent of the Kremlin, socialized in the weeks before the 2016 election with a former Trump campaign aide who anticipated joining the presidential transition team, emails show, putting her in closer contact with President Trump’s orbit than was previously known.

Butina sought out interactions with J.D. Gordon, who served for six months as the Trump campaign’s director of national security before leaving in August 2016 and being offered a role in the nascent Trump transition effort, according to documents and testimony provided to the Senate Intelligence Committee and described to The Washington Post.

The two exchanged several emails in September and October 2016, culminating in an invitation from Gordon to attend a concert by the rock band Styx in Washington. Gordon also invited Butina to attend his birthday party in late October of that year.

Jesus fucking Christ. You can take a woman to a Styx concert and still get laid? Who knew?

I find it unfathomable, to say the least, that an impressionable Russian graduate student fucking her way through the upper echelons of the conservative movement wouldn't go to pieces at the sight of Tommy Shaw playing rhythm guitar because moar guns and shit, did they play Mr. Roboto or is that a Dennis song they won't touch anymore?

Gordon is the shitbag traitor who gifted us all this gem:

Gordon's remarks represent a dramatic shift from previous comments, and they come as Attorney General Jeff Sessions faces intense  scrutiny over two previously undisclosed meetings  with Russia's ambassador to the US — one of which was timed to the convention.

In January  , Gordon told Business Insider that he "never left" his "assigned side table" nor spoke publicly at the GOP national security subcommittee meeting, where the amendment — which originally called for "providing lethal defense weapons" to the Ukrainian army to fend off Russian-backed separatists — was read aloud, debated, and ultimately watered down to "providing appropriate assistance" to Ukraine.

According to CNN's Jim Acosta, however, Gordon said that at the RNC he and others "advocated for the GOP platform to include language against arming Ukrainians against pro-Russian rebels" because "this was in line with Trump's views, expressed at a March national security meeting at the unfinished Trump hotel" in Washington, DC.

Here he is as a spokesman at the Pentagon:

You're telling me all of these unattractive white Republican men had "relations" and "dates" and "Styx concert tickets" with this woman and did not make sex tapes? I simply do not believe you, sir. Somewhere, they have all of her E-mails to her girlfriends back home, and she has to be bitching about the fact that she was promised deep cuts from Paradise Theater and, like always, no one would perform.

Our democracy is crashing down all around us, they're throwing babies in jail, now I have to deal with this garbage? I'm actually looking up setlists and wondering, "why would they do Mr. Roboto if they're actually trying to make it so that people can go to their shows and get laid afterwards? There's no conceivable way they could have played anything from that album and stayed on the road, right?

My brain is fried. Who the fuck let these people anywhere near the reins of power in this country?