Duncan Hunter Blames Democrats For Making Him a Scumbag 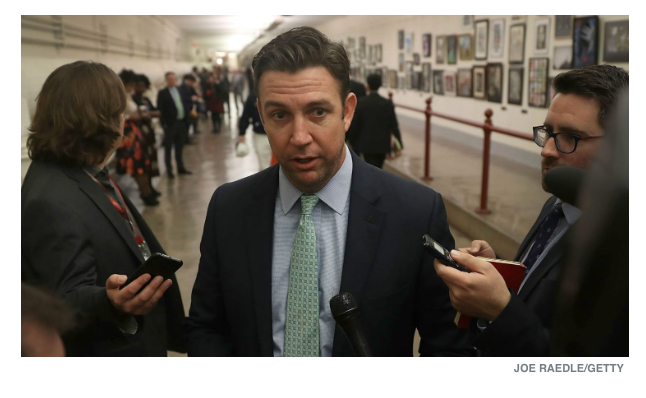 Back in the day, anyone as sleazy as Duncan Hunter would already be making arrangements to clear out of Washington D.C. and go home to sell used cars:

Republican Rep. Duncan Hunter (R-CA), who was indicted by Justice Department on Tuesday for allegedly improperly using his campaign funds, told local news outlet KGTV that the “Democrats’ arm of law enforcement” brought the accusations against him. “It’s happening with [President] Trump, it’s happening with me. We’re going to fight through it and win, and the people get to vote in November,” he said. “I think they’ve used every dirty trick in the book, so it’ll go to court when they want it to.” He elaborated on the “new Department of Justice” further, calling the agency’s officials “a politically motivated group of folks.” “We’re excited about going to trial with this, frankly,” Hunter said. “I’m not worried… We’re not leaving, we’re not backing away. We would like for the government to present its facts. It’s wrong. This is politics, unfortunately.” Hunter is accused of spending about $250,000 in campaign funds on family vacations, food, groceries, and school tuition—among other personal expenses. He previously admitted that “there was wrong campaign spending” but said that “it was not done by” him.

You know what, Representative Hunter? Go fuck yourself. You, your family, everyone who helped you steal all of that money--you can fuck off back to San Diego and get work sucking dicks by the freeway.

No one made you become a crook. You did that to yourself. No one messed up your paperwork except yourself. You saw the cookie jar, you put your hannie into the cookie jar, and the Feds caught you doing it because you were incompetent at being a shitbag thief. The Democrats didn't do shit to you. You did this to yourself, fuckface.

I am so done with these people. Becoming a Representative or a Senator is the path to wealth in this country. If you don't even have to common decency to do what 99 percent of your colleagues are already doing and find the legal means to line your pockets, don't whine like a titty baby about getting caught by some flatfoot who knows how to read the shit your staff clearly leaked to the Justice Department because they were tired of watching you steal whatever wasn't nailed down.