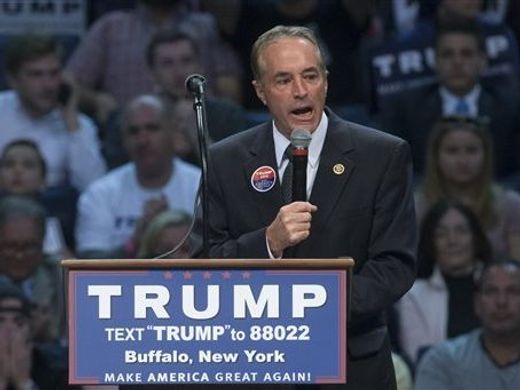 In case you were wondering, this is what you have to do in order to get Speaker Paul Ryan to come out of hiding and do his fucking job:

After Rep. Chris Collins (R-NY) was arrested Wednesday on federal charges of insider trading and lying to the FBI, Speaker of the House Paul Ryan announced that the lawmaker would be temporarily removed from his position on the House Energy and Commerce Committee. “While his guilt or innocence is a question for the courts to settle,” Ryan said Wednesday according to a press release, “the allegations against Rep. Collins demand a prompt and thorough investigation by the House Ethics Committee. Insider trading is a clear violation of the public trust. Until this matter is settled, Rep. Collins will no longer be serving on the House Energy and Commerce Committee.” As The Daily Beast reported this morning, Collins is charged with using his position at a pharmaceutical company to warn his son that the company’s multiple-sclerosis drug had failed its FDA trial in 2017. His son, Cameron, then dumped more than 50,000 shares of his stock in the company before that knowledge became public. Both Collins and his son are also charged with lying to the FBI.

Note that this is "temporary" because Paul Ryan doesn't move like lightning, peeps. And, please note that if Collins flips on his friends in the House, he'll probably end up not being mentioned by Speaker Ryan in glowing terms. In fact, Ryan might even express his sadness and frustration with the fact that Collins appears to be a self-serving crook who helped show the American people that, when Republicans govern, they cash in.

How much crime and corruption are the American people willing to put up with? Quite a lot, apparently, so long as the libs are being owned in the process.