Trey Gowdy is a Fraud and a Coward 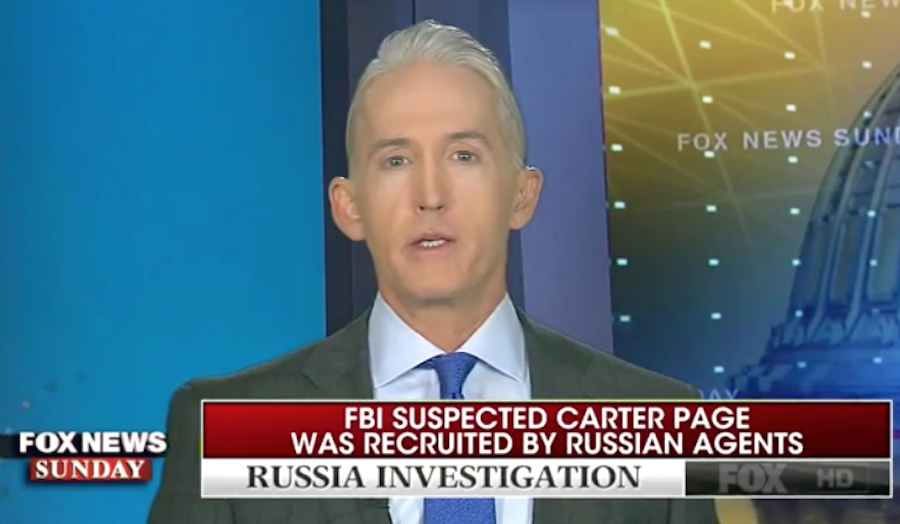 Trey Gowdy is the Republican House member who was caught falsifying the Benghazi evidence in order to frame Hillary Clinton. He would also like you to think that he has the credibility to say this in public and get away with it.

Rep. Trey Gowdy told FNC's Bret Baier on FOX News Sunday that while there are documents he has not seen, he knows that if there were any evidence that President Trump committed any crime with regard to Russia "Adam Schiff would have leaked it."

Schiff, the top Democrat on the House Intelligence Committee, said this week that President Trump is compromised by the Russians, offering possible recordings of his meeting with Putin as evidence. Later on Sunday morning, Schiff suggested Trump's businesses were Russian money laundering operations.

"I have not seen one scintilla of evidence that this president colluded, conspired, collaborated, with Russia. And neither has anyone else, or you can rest assured, Adam Schiff would have leaked it," Gowdy said. "That is why they have moved on from collusion on to obstruction of justice, which is now their current preoccupation."

Gowdy leaves Congress at the end of this term having gotten exactly none of his main targets. He can't defend his record, he can't stand for re-election, and he has to skip town and evade the scrutiny that comes with lying on behalf of Trump. So what else is there for Gowdy? He gets to act out his shitposting in real time on Fox News with a clown like Bret Baier.

This attack on Representative Adam Schiff has no credibility behind it whatsoever. It is cowardly and irresponsible, given that there's no evidence to suggest that Schiff is as scummy as his counterparts on the other side of the aisle who are leaking everything they can get their hands on.

In fact, most Democrats will readily tell you that they wished Schiff was more like his GOP colleagues and would leak information that damages Trump. Instead, we get a more thoughtful and responsible lawmaker in Schiff who refuses to run away from this fight and will stand up to Trump and the Russians.

Have you ever noticed that, just when Republicans in Congress should be fighting the Russians, their preferred choice is to abandon the people they represent and go make money lobbying? Why isn't this front page news?

History is going to take a huge crap all over these people, and they're going to end up in obscurity, pretending they aren't who they really are in order to get free coupons for bullshit they don't need.