Republicans Are at War With the FBI 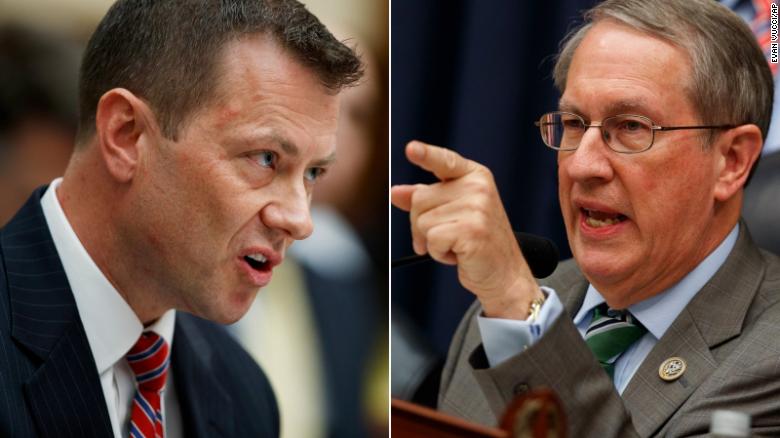 My first rule is, "none of the people making decisions about Trump, Russia, and collusion in 2016 were heroes." My second rule is, "always bet on the Republicans in Congress to make themselves look bad:"

Even by the clown show standards of the House of Representatives, this was not democracy's finest hour.

A hearing starring Peter Strzok, the FBI agent who presided over the start of the Russia probe, degenerated Thursday into a theatrical display of sanctimony, mock outrage, all-out partisan bickering and character assassination as grandstanding members on both sides of the aisle played to the TV cameras.

Republicans, posing as grave prosecutors of a state crime, sought to paint Strzok's anti-Trump political commentary in texts to a former lover as a symptom of institutionalized bias that should invalidate special counsel Robert Mueller's investigation into Russian meddling in the 2016 election -- from which Strzok has been removed.

Democrats battled to defend him from attack after attack, and to turn the focus back onto alleged collusion between the Trump campaign and Russia.

And Strzok, who often wore a bemused smirk as lawmakers squabbled and talked over one another, barged into the hearing loaded for bear. He shouted back at his inquisitors as they bellowed at him and drove them to distraction by refusing to answer questions. He also delivered a passionate and angry defense of the FBI from a GOP attack that he said "deeply corrodes" the bureau.

Strzok is a counterintelligence guy. You want him to be difficult, brazen, driven, and a complete and utter asshole. You want him on your side. You want him to go after people who are concealing themselves in a cloak of plausible deniability. He is the guy leading investigators down a path that can sometimes end up nowhere. He has to direct and organize the effort to determine who might be really good at looking innocent. He is the guy who has to take a look at someone and decide whether or not they are betraying this country. So, at the end of the day, a person charged with rooting out traitors and spies is going to have all sorts of things about him you will probably not like. Strzok ended up looking like he was good at his job and the Republicans in Congress ended up appearing as if they have no idea what oversight and compliance looks like.

It was a shit show, top to bottom.

This Republican Congress, which isn't led by anyone anymore because Paul Ryan is the ambulatory version of ¯_(ツ)_/¯ and doesn't care if the whole thing burns down because he's got his, is a face in perpetual need of punching.  I still can't believe they don't understand that, one day, the FBI is going to investigate Democrats. I can't wait for that day. Because then, in a very delicious manner, someone's going to put their feet up on the desk and say "Peter Strzok, motherfucker." And that Repub puke is going to have to sit on his hands after he eats his own hat.

Does it matter? No, it really doesn't. The GOP is supported by people immune to the truth. Facts are meaningless because they've been conditioned to believe the news is lying about THEIR PRESIDENT. It is THEIR country and all the people they don't like are taking it over, so the personification of this, the Republicans in the House, are an extreme group of men and women who are useless and terrible at what they do. They are goosed along by a conservative media establishment that has no standards, only clicks to give, and they are designed to operate like Buzzfeed. Here's a story about a guy who turned in three blank pieces of paper. The headline reads MASSIVE FRAUD DETECTED WHEN MANUSCRIPT CONTAINING HILLARY'S BRAIN APPEARS, and we're off to the races. The caged animal that is the conservative movement in this country has to be stimulated and stoked, constantly, or it will notice that no one is giving them jobs, health care, safety, security, education, quality of life, good government or a future for their kids.

Substance doesn't come into any of this. These people don't want substance. They want click, outrage, reassurance their guy is solid, and then a sexy picture of a girl with big boobies and a gun before they're on to the next dumpster fire.

For all other thinking Americans, today was as bad as it gets in a country where tomorrow promises something worse than you could have imagined. There is no bottom. When Louie Gohmert goes after Strzok about committing adultery, he's just feeding the conservative movement another pound of stinking, rotting red meat. Tomorrow, someone has to throw more offal and guts into the cage to keep the beast howling and thrashing in all directions.

When the cage falls apart, and you see this every day when the public arena is shattered by racist acts, the full wrath of white, racist America is trying to break out into the open. Often, it succeeds and we wonder, "how is this happening in 2018? Everyone who made it happen is looking for the exit. The culprits are leaving this Congress in droves. They produced the red meat, they kept Trump in power when it was apparent over a year ago that they should have quickly impeached him, and now they don't know which lullaby will put the monster to sleep.

Someday, the Republican Party is really going to need the FBI. My fervent belief is that everyone in that goddamned organization is now fully awakened to the fact that the GOP has slathered them up with whatever it is that caged beast is hungry for as they packed up and left town. Someone's going to let this red-eyed, bellowing demon out into the open so it can consume itself, and then someone's going to have to put the country back together.

Yeah, that's you and me. Our days are going to have to be spent fixing all this broken shit, and I'm not happy about it, either.