How Could You be More of a Disgrace Than John Kelly? 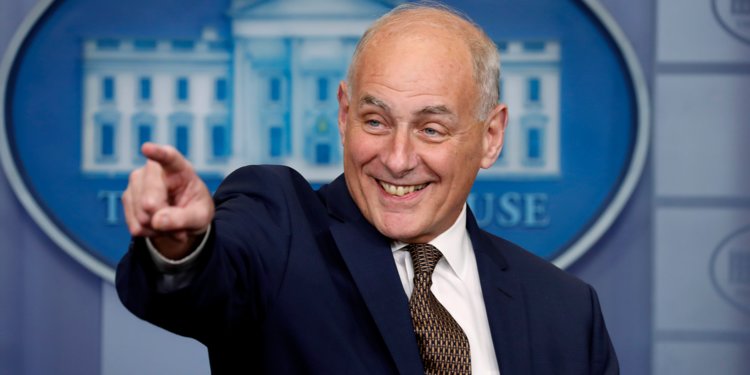 If John Kelly is still White House Chief of Staff five years from now, a typical Wednesday blog post around here is going to be, "Kelly stood by and did nothing while a shirtless, baloney-covered President Trump whipped the retired Marine general's bare ass with an electrical cord and gurgled like a drowning seal."

White House chief of staff John Kelly may have appeared notably agitated while President Trump lashed out at Germany at a NATO breakfast in Brussels on Wednesday, but that’s only because he was “expecting a full breakfast and there were only pastries and cheese,” according to White House press secretary Sarah Huckabee Sanders.

And here's another thing we'll be writing in the dark days that lie ahead. "Inexplicably, the national press accepted something that Sanders said without questioning any aspect of it."

Sanders told The Washington Post that Kelly’s body language at the time was not because he was embarrassed by the president, as many speculated once video of the meeting went viral, but because he was “displeased” with his breakfast options. Kelly was not the only official present to appear uneasy as Trump claimed that “Germany is totally controlled by Russia,” however. U.S. ambassador to NATO Kay Bailey Hutchison was also caught on camera looking uncomfortable as Trump made a series of comments that shocked top NATO officials. It was not immediately clear if Hutchison was also disappointed in meal options.

This isn't even bullshit anymore. Bullshit, the people could handle. No, this is terrible fan fiction written by the twisted clowns who inhabit the White House. This is the stuff they find in the trash behind the worst creative writing class your local middle school held last year.

None of these people has any credibility or dignity anymore and, for that, they all need to be mocked and humiliated for the next hundred years. Babies and old women should scream in their faces in public. Teenagers should routinely make a game of breaking into their cars so they can shit on the floorboards and pour Valvoline onto their bucket seats. Decent people should shun them like junkie airline pilots who left nothing but wreckage and roofless houses behind.

There is no greater disgrace to the republic for which it stands than men and women who will debase themselves for a cult of personality based entirely on white supremacy, a noticeable blonde-with-big-boobies fetish, and Big Macs.