Every Day of this Crisis is Overwhelming 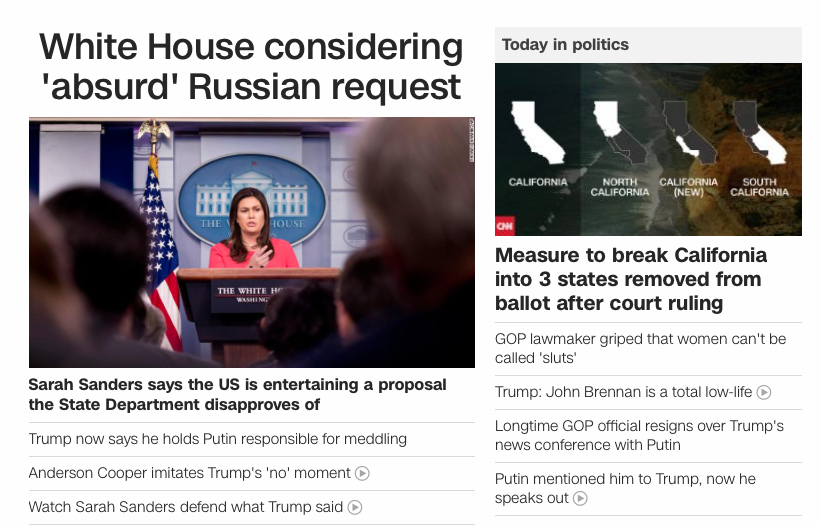 This grouping of stories on CNN.com probably looks amazing if you're sitting in Russia right now, afraid that your boss Vladimir Putin is going to start overreaching a bit.

I know it is discouraging, but Putin is famous for his greed and his arrogance, and that will be his undoing. As he amasses vast personal wealth and kills as many enemies as he can, remember that there are at least a thousand men in Russia right now who imagine themselves as his successor. None will hesitate to kill Putin if given the chance. So, there's that.

But it's important to note that the media is beginning to wake up to the fact that, hey, this Trump guy is a liar. He should be mocked for that! And so, they're doing it, a year late, but you have to take your victories where you can find them.

The narrative that is being established is, "Trump is weak, compromised, owned by Putin, probably a traitor, and Republicans have to be voted out in November." As this takes hold, note the hard work being done by people who are in the front lines against Russia's attack on Western democracy. Not just in this country, but all over the world where democratic countries are besieged with efforts to drive wedges between population groups that have been picked apart by the analytics people who should, rightly, be driven out of business.

A judge in California has said, enough of this bullshit, no way we're going to let people vote on splitting the state into three entities. You'll conveniently note that this would send four extra Republicans to the Senate, which would cancel out the two Democrats that are already there. It would probably allow more Gerrymandering and allow the Republicans to add ten more members of Congress to their totals as well, if not more. If this country was more like California, I think we'd be better off. Common sense seems to prevail there, despite all of their problems. At least the answer out there is, "let's do something smart to fix this" as opposed to, "let's do stupid shit so we can own the libs."

How can you write about all of this? I simply can't keep up. But, I do know one thing--it is beginning to dawn on people that it's obvious Trump is Putin's Poodle. As this takes hold in the public consciousness, remember that these narratives are important for people who don't follow politics and don't usually vote. Motivating people to get to the polls in order to throw Republicans out of office is the Lord's work this year. Everyone working to make that happen is an angel who will save our country.