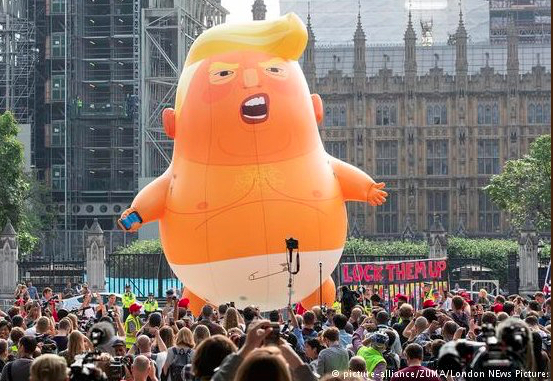 It has not been a great trip overseas for Trump so far, has it?

No, it has not. In fact, how many other American presidents have traveled overseas and have been so roundly mocked and protested as this one? And the trip isn't over yet.

It is incredibly important to note how the British went about their protests. They mocked Trump, and they did it in every way possible. They didn't worry about whether it was fair. They just set up camp in the vulgar gutter of modern political discourse and used the words "shitgibbon" and "cunt" as interchangeably as they possibly could. This is how you fight the dictator--by mocking him and showing him for what he is--the reason for the need for that language in the first place. Trump set the rules by grabbing them by the pussy and talking about "very fine people on both sides" and women as if they were there to pleasure him. He is not, all of a sudden, going to stop saying these things.

I'm as tired as anyone of the civility police, and I think that this misses the point entirely, whether we're talking about Trump or his knee-jerk enablers: 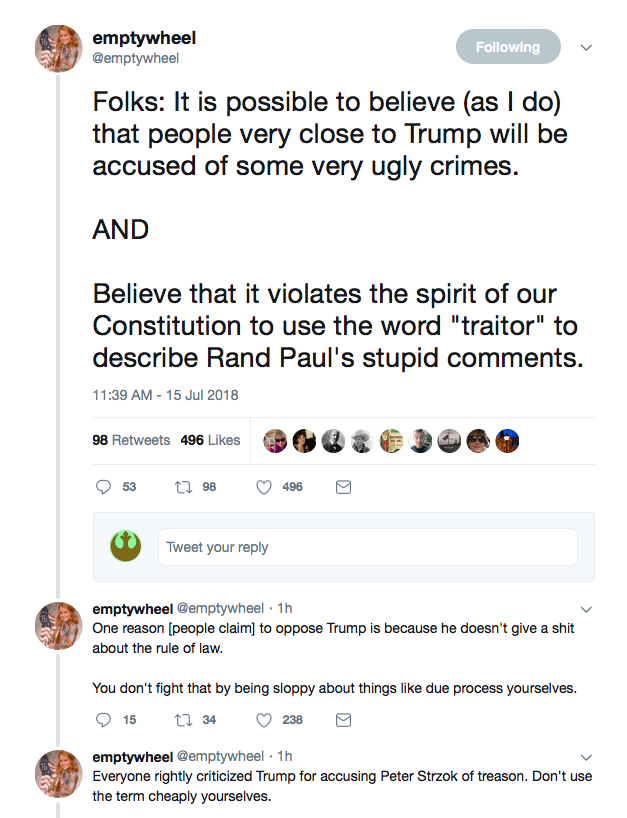 Don't police the rhetoric of people on your side; the only way the message is going to get through to the American people is through the same harsh language Trump and his surrogates have been using for years. I don't care if Rand Paul is a traitor or not, but if someone thinks his statements in public amount to treason, I'll let them make that argument.

I'm more interested in the fact that we can't call Republicans traitors. Really?

I have said all along that the act of seizing the office of the President of the United States is an act of war against this country. If you put Trump in power, you definitely did commit election fraud. And that's serious. But you also seized the office and the power of the Commander in Chief of our armed forces. That's an act of war. Anyone who aided and abetted the Russian effort to install Trump in office betrayed this county and committed acts of treason.

Full fucking stop. And the media ain't saving us right now, is it?

You are not going to beat Trump with prissy, exact language and stepping on your dick when you stumble towards polite discourse. People hate the Democrats because they cave in and won't fight in the gutter. If you want to save American democracy and all the other nations that depend on it, you might want to acquaint yourself with how the gutter looks. This is not a rhetorical argument about policy. This is about fighting the guy who will not observe the same rules of courtesy and decency. Due process and the law mean nothing to Trump. Everyone better remember that. By all means, get him with the law. Use the rule of law. But, on the edges, you better be prepared for Trump to cheat, always.

Who is in power right now because of Russian help? Who refuses to enact strong sanctions against Russia and then enforce them? Who met with the Russians in the bowels of Trump tower? Who got caught setting up a back channel to Russia to evade surveillance by our intelligence agencies? Who met with the Russian ambassador? Who consistently criticizes everyone from the leaders of our allied countries and pop stars and actors and whoever else more harshly than the murderous thugs in Moscow?

Trump wins when the civility police muddy the argument that is before the American people. I didn't spend the Fourth of July in Moscow kissing Russian ass, so fuck that shit. Celebrate the fact that the British have shown us new and exciting ways to mock the dictator, and now I want to see that balloon flying over Lafayette Square.