There is a Massive Disinformation Campaign Underway Right Now 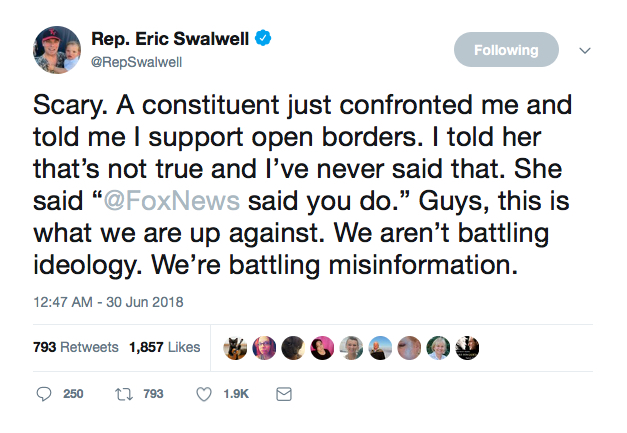 If you spend a reasonable amount of time watching the efforts of the conservative movement in this country, it is impossible not to spot the fact that we are re-living the summer of 2016. A massive campaign of disinformation and deception is underway all around us, but we are only seeing the face of it.

I truly believe the Russian attack on our election in 2018 will just be a re-tread of two years ago, only, this time, those poor kids in the Balkans won't get their $700 checks from Google as often.

Representative Swalwell is fighting a losing battle. He wants to change the "hearts and minds" of the people who watch Fox News. It's not going to happen.

How old were you when you realized adults were full of shit? That people were weak and didn't change? Did you know any drug addicts? Far too many of them have to go to rehab five, six, seven times before they finally admit that they're drug addicts and need to stop. Drinkers rarely stop drinking, and gambling addicts are wrapped up in their own bullshit. I have never met any sex addicts, but I hear they are ridiculous and boring.

Trump voters are the people among us who always let everyone down when they get on the wagon and fall off of it the next day, taking our loaned car with them into the tree of destiny. They always run off with your last hundred bucks, and they rarely have a good time with it. Usually, they buy the wrong size bag of chips and the worst liquor they can find and blow the rest on fallow lottery tickets. Goddamn them, why do we keep trying to find the patience to wait and see if they change?

They're not going to change. They're going to keep voting for the daddy/asshole/white supremacist that comes after Trump.

Oh, sure. Some people wise up and put themselves back together. Some people wake up and know they did something wrong. There are always exceptions to the rule. They're going to have to figure it out for themselves and change their own closely-held opinions. Don't hold out any hope of that. This would require being a mature adult. Good luck finding them. They're rare, but they're out there.

Americans hate to admit that they have been fooled or hoodwinked. In 1975, how many proud Nixon voters could you have found? Probably more than a few, but they would have been cranks or weirdos. The country we live in has a memory hole large enough to swallow the Trump era, too. In a few years, it'll be like walking into the American Legion and meeting twelve Medal of Honor winners who just happened to have all been Special Forces and definitely not rear-area malcontents who got kicked out for masturbating in the guard shack. You won't be able to find a Trump voter anywhere.

And, to be fair, there weren't that many. The tyranny of the minority ruled the day.