The Antidote to Trump is Voting Every Republican Out of Office 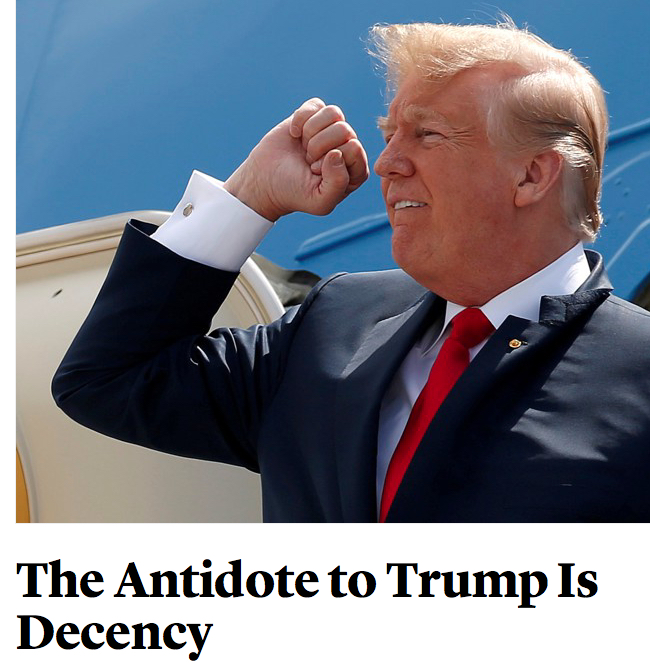 There’s a lesson here. Donald Trump and the political movement behind him are empowered by ugly talk. Their own talk stands out less sharply in contrast. “You did it first … you did it worse … you do it more” are accurate enough answers, but they are not as powerful as not doing it at all.

Trust your country—not all of it, sadly, but enough of it—to notice and appreciate the difference.

Decent people need to put their shoulder into the heaving, corrupt carcass of the Republican Party and push it back out the door. Decent people are too fucking angry, too used to days and days of horrible policies and ridiculous nonsense to put up with any more of this goddamned bullshit. It's not enough to wither and melt in the face of an onslaught on the American idea and a full-on mugging of the rule of law. The idea that you have to be decent to shitty people is concern trolling.

You need to push back and fight like crazy because they are counting on you following the rules while they break them. They are counting on you having careful, restrained language while they say whatever they want. They are counting on controlling the rules of the debate and the parameters of the discourse so that they can obliterate you and dehumanize you and put their foot on your face. David Frum can't quite bring himself to understand that when eliminationist rhetoric is used against the American people, death and destruction are soon to follow. This cannot be tolerated and this cannot be dismissed. It must be met with the law and with the passion of a people who won't let anything as atrocious as Trumpism survive the next election cycle.

The elites have failed, and there is no one coming to save us.

You must insist that your neighbors be allowed to vote.

You must battle apathy.

And you don't have to refrain from using colorful language in the face of anyone who is indifferent to the suffering of lost children, drowned Americans, dead troops, and people dying without health care. You can call them cunts and shitgibbons and fucksticks all you want because that's what they are for not caring about other people.

In reality, they're psychopaths, and our fellow Americans were entertained enough to hand them power. The fight to take that power away isn't just fisticuffs with gentleman's rules. No, the hell with that. Whatever they bring, come back harder and never give up.