Someone is Carrying Out Hate Crimes in Kansas City 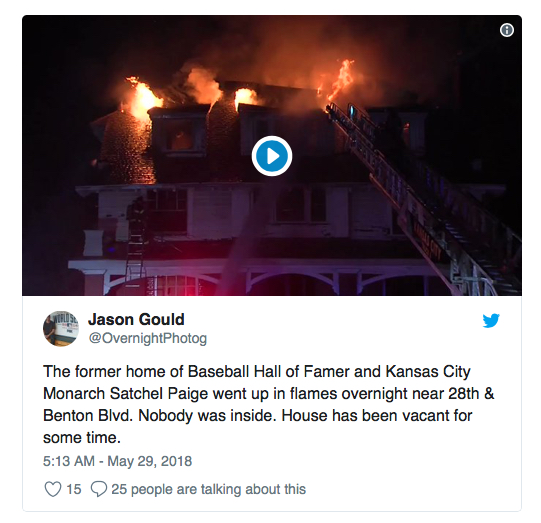 Here's another aspect of living in Trump's America that people are probably not paying too much attention to because the whole country is burning down around us:

Since its founding in 1990, the Negro Leagues Baseball Museum in Kansas City, Missouri, hadn't had any serious issues with vandalism—until last week, when its Buck O'Neil Education and Research Center was flooded after a water line on the second floor was cut and the water was turned on, dousing not just the second floor, but the first floor and basement as well.

One month prior, another Kansas City Negro Leagues landmark faced a similarly catastrophic crime: A suspected arsonist set the home of pitching legend Satchel Paige on fire in late May, leaving potentially irreparable damage. Both cases were far more serious than the graffiti tagging that typically plagues out-of-use buildings.

So, the history of the Negro Leagues Baseball is being vandalized and going up in flames and it may or may not be a hate crime. An accelerant was used to burn down Paige's home. This looks like targeted hate to me. This is the sort of story that would have been huge news several years ago. Now, it fades into the background, all but ignored because of more pressing issues.

And I get that--it's not the biggest thing happening today, but it's a terrible shame and a stain on our society because someone has likely felt like it is okay to start going after one part of the history of African-Americans in this country. It's not enough that they're attacking our democracy and that they're going after people online and in the public spaces of this country. We have real, actual Nazis who are butt-hurt that their demonstrations are sparsely attended. Americans have unleashed their inner bigot and are saying horrible things to perfect strangers. It's shocking how much incivility there is, but then again, it isn't because this has been let loose by the publicly spewed mouth diarrhea of Donald Trump.

These museums and historic sites are no threat to anyone--they're simple, dignified places that constitute part of our sporting history that deserves to be remember for what it commemorates. The men who played for those teams laid the groundwork for the transformation of baseball, suffering untold indignities for being excluded from an all-white sport. What made this a better country was the normalization of the idea that everyone should be allowed to play ball, regardless of their skin color. Someone wants to degrade that and foul our memories and burn it all up.

If someone is doing this purely out of hate, then this is on Trump's head. Hate crimes have always been a part of our social fabric, but in this era, this hate is fed by the absolute worst example of a leader and the most irresponsible rhetoric anyone has ever seen.