Everything About This is Awful 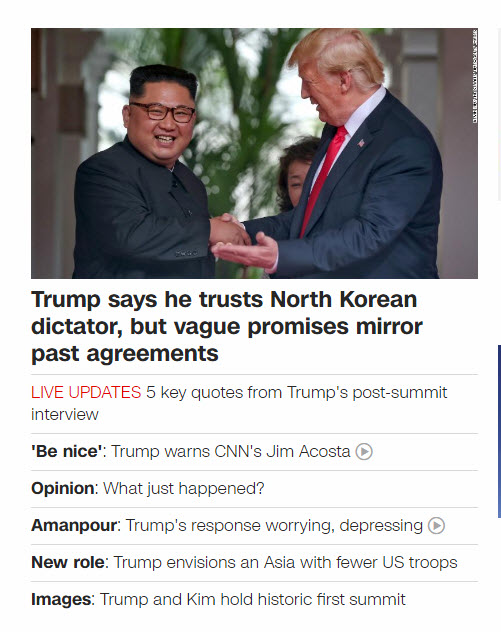 I haven't written much over the last few weeks because everything is so awful, how can you even touch what's already out there? How can you provide any kind of commentary when all you need to say is, "this is ridiculously bad, and the media has decided to stop explaining why it is so bad, so here's another useless post explaining why it's horrible."

If you didn't think you were going to live long enough to see an American president embrace a homicidal maniac of a "leader" you were mistaken. If you don't already know, the systematic destruction of the North Korean people is a relentless march through starvation, prison camps, forced labor, oppression of all expression, and the promotion of a sickening cult of personality. It is the elevation of a juvenile, immature form of human cruelty to nation/state level. It is the personification of everything wrong with organizations like the United Nations because, in a just world, everyone would agree that what North Korea has done to its people is a massive crime against humanity that must be stopped. There is no shortage of evidence of what they do to their people above the 38th parallel. Why do we continue to ignore a human rights calamity of epic proportions? Because people want their phones and gadgets and cheap goods from China to keep flowing.

Anyway, the President of the United States of America was kinder yesterday to the most repressive and brutal dictator in the entire world than he was to a journalist working for CNN. Trump was deferential and fatherly to Kim Jong Un and nasty to Jim Acosta. While overseas. While pretending to make a deal. While selling out the South Korean military, which, as I can attest to, would really like to invade North Korea and free their country cousins from the Kim dynasty. He did this while smiling and acting like he was accomplishing something. He did this while in the presence of a media apparatus that swallows up this farce and shits it out like something people ought to consume as "truth."

Yeah, this is why I don't write much anymore.

Imagine any Democratic president ever doing anything like this and being treated with the same level of deference and respect as Trump. You can't because this is how we live now.