Do Not Mock the Dictator of America 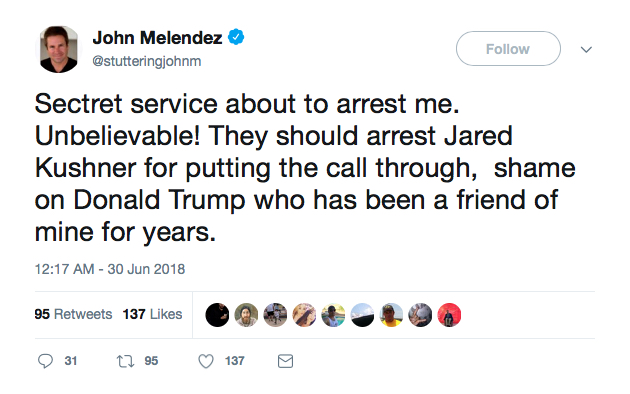 I have no way of knowing if this is true or not, but I had to find one way to start a blog post that I hadn't used in several days, so here you go (UPDATE - Melendez is a serial liar and an unfunny fool--a philosopher of these times, in other words).

If the fellow known as "Stuttering John" really did prank Trump, then good for him. He is an American citizen with First Amendment rights. Yes, you can prank the president and claim free speech. It does not protect you from getting fired or being boycotted, however. People are free to look at this guy and decide whether or not his efforts have succeeded in the marketplace of ideas. Was it dumb? No, it was probably a belly-shaking good laugh for John Melendez. Was it smart? No, because we live in a dictatorship now.

Yes, the dictator has taken over (not really, but it's fun to think that we are already living through Trump's second term, according to the prognostications of Michael Moore).

There are few, if any, good satirists out there. I'm sure they'll put a muzzle on Stephen Colbert before the end of the year. The rest of them will fall in line. In the Sixties and Seventies, we had great satirists. Now, we have people who are brand aware who will suddenly start talking about airline food and long lines at the Apple store and hey, where can you get the news these days?

Are there courts that can stop Trump? Well, for a while, sure. But the Supreme Court will soon be in the hands of a radical, fact-free conservative minority that has a bug up its ass about taking away the rights of women. Oh, I bet you thought this post was about all of those white women who voted for Trump. Their private parts were a subject of great consternation almost two years ago. In less time than that, they will no longer have to worry about them, because the government will take ownership, courtesy of the dictator.

A smart person would take down their social media and run their blogs and websites and other forms of expression down into the ether, and delete everything. If they can come and arrest you in your home because you got the half-witted son-in-law to put your call through to the even less witted president, well, you're obviously a subversive who needs to be put in a jail cell until a camp for you can be built in the sweltering heat of the desert Southwest. There are plenty of Republicans in those states, and they won't say a word when the camps crop up in the middle of no where. They'll be just like all the good Germans, and no one will notice how things are going out there.

America is finally going to get a taste of what everyone else has had to eat for the last few hundred years. This Republican Congress, in exchange for donations from overfed penny pinchers that wouldn't add up to the price of a used car, has sold itself down the river for a banana republic hefe who will NOT BE MOCKED.

You best get to deleting. 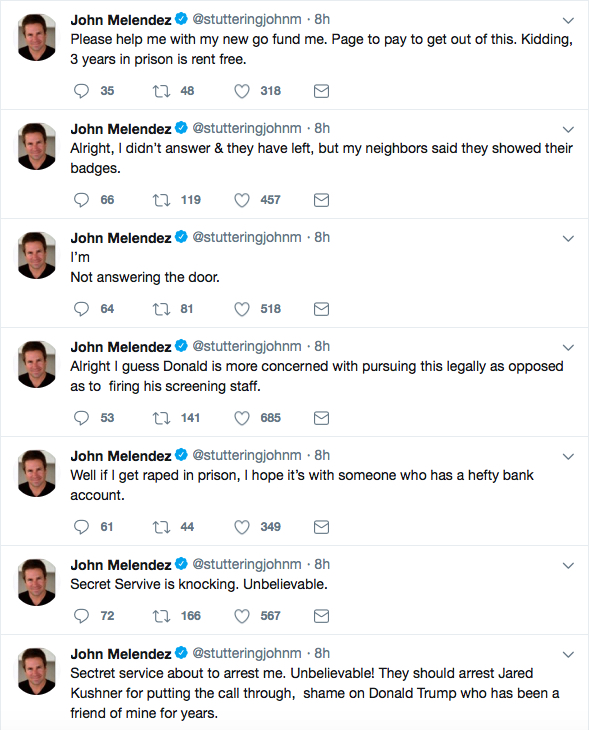 Definitely a friend of Donald Trump. What an asshole.