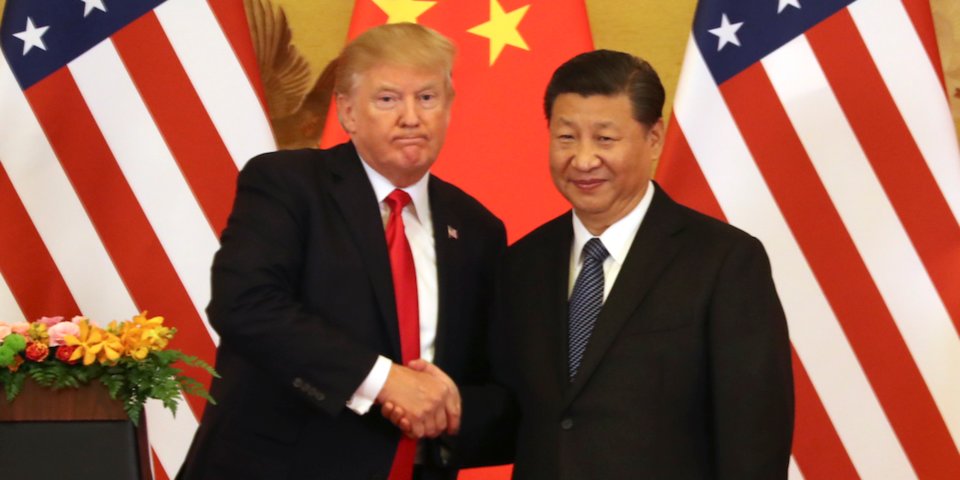 Do you remember the Trump rally where he promised he would take unilateral action to save Chinese jobs and reverse the fortunes of a massive, failing government-owned Chinese tech company?

I could have sworn that rally was held again and again on CNN, MSNBC, and all of the other networks where Trump got free air time:

[...] on Sunday Trump tweeted that he and Chinese President Xi Jinping "are working together to give massive Chinese phone company, ZTE, a way to get back into business, fast. Too many jobs in China lost." Trump said the Commerce Department was told to "get it done!"

Hours later he tweeted that the U.S. and China were working well together on trade, but it would be hard to work out a deal beneficial to both sides because "past negotiations have been so one sided in favor of China, for so many years." He added, "But be cool, it will all work out!"

It turns out, Trump never promised American workers he would bend over and take it up the ass from the Chinese so he could save their jobs. Do you know what? American voters in the dirt-poor Red states don't have $500 million dollars to pour into Trump's Indonesian real estate scheme, but the Chinese do. Guess what, suckers? You should have brought cash to this party.

It turns out that this was all just another case where a known and proven serial liar told the American people one thing and has now gone and done something that works completely against the economic self-interests of the people who voted for him.

Just seven months before the 2018 midterm elections, Trump’s faceoff with China over trade has exposed an unexpected political vulnerability in what was supposed to be the Republican Party’s strongest region: rural America.

The clash with China poses a direct threat to the economies in both red and blue states, from California’s central valley to eastern Washington through Minnesota’s plains and across Missouri and Indiana and into Ohio.

They are regions in which the GOP’s quest to retain its House and Senate majorities this fall is tied directly to Republican voters’ views about their pocketbooks and Trump’s job performance. The signs of fear and frustration about both are easy to find.

In southwestern Minnesota, soybean farmer Bill Gordon says the volatility in the markets makes it harder for farmers like him to market their crop and lock in profitability. The state is the country’s fourth-largest exporting state, and the state’s top farm export market is China.

A Trump voter, Gordon said right now he’s disappointed, not angry, over what’s happening. But the trade tensions could affect his vote in the open race for the region’s congressional seat, where the farm vote is significant.

“I vote for the people who represent rural America,” he said. “It’s not a party line.”

Oh, fuck that shit. That guy is going to vote for Trump in 2020 and he's going to vote Republican until they put up a candidate who promises to help people of color have a better life. The only thing these voters care about is if Trump keeps sticking it to liberals and maintains his policy of white supremacy through nepotism and incompetence. They don't care if their livelihoods fall apart before their very eyes because of Trump's pride and stupidity. They want their white supremacy, and they want it now. As long as Trump keeps giving it to them, they're going to vote for Republicans. Oh, hell yes, son. Hell yes.

Want to beat these assholes? You gotta vote. And you gotta get your neighbors to vote. Your dopey kid who is barely 18? Get that kid to the polls. Drive some elderly folks there, too. And hold on to your ass because it's going to be a close one.