The Media is Killing This Country 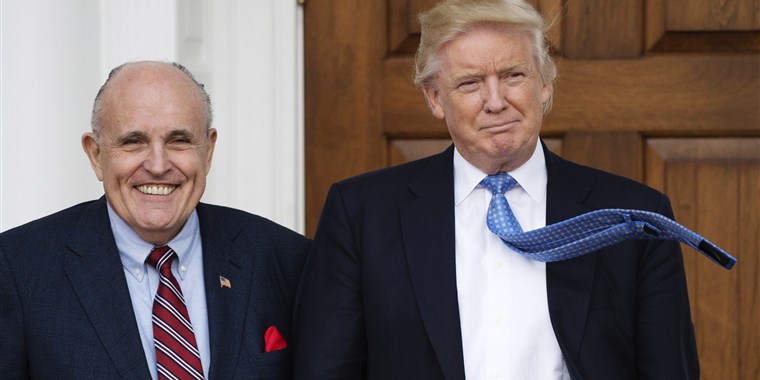 If you have a pair of individuals involved in lying to the American people in order to hold on to power, the normal course of action for an ethical, responsible media is to expose their lies and hold them accountable.

I saw this time and time again with regards to Hillary Clinton. If the media ever thought they had a whiff of a lie, they went after her. They wrote about her supposed lie, endlessly, and without any hint of humility. There was no hesitating because of a need to preserve access--they tore into Clinton and treated her with a set of rules that does not apply to Trump.

When I read articles like this about Rudy Giuliani, it proves my point--the media is killing this country because they won't apply any standards to how they cover Republicans in the Trump era:

He is ridiculed as ridiculous. He is attacked as around the bend. He is maligned as morally bereft in his unwavering defense of his old friend and client, President Donald Trump.

Yet Rudy Giuliani may just be crazy like a fox.

It turns out that he is doing exactly what the President -- his own best strategist and communications specialist -- brought him on board to do: chip away at public support for special counsel Robert Mueller's Russia probe.

It also turns out the President needed someone exactly like Giuliani to take on the role of flamethrower. His skin is thick after decades of dealing with New York tabloids, so bad press doesn't get to him as it would others.

His relationship with and understanding of the President allow him to speak fluent Trumpian. The fact that they're two Geminis in their early 70s from New York City helps make them kindred spirits.

Because of that, so far, Giuliani has avoided the fate of others, like Anthony Scaramucci, who spent a little bit too much time in the spotlight for Trump's taste.

Why is Giuliani on TV? Because they want ratings. They are trading a desire for ratings for the very idea that you have to have credibility in order to appear on TV. That rule no longer applies. In the old days, there was sort of unspoken rule that you had to tell the goddamned truth in order to go on TV or you would be ridiculed and blackballed. If you were only there to spew propaganda or talking points, it didn't matter how entertaining you were. Journalists used to make the reputations exposing liars. Imagine what a Mike Wallace would do to people who now work for Trump (and, no, his son does not even approach his father's ability to suss out flagrant liars). Media outlets used to have standards for bringing out guests. Now, all of that is gone. Credibility is no longer a commodity. In some ways, it's a liability. Coverage of Trump should simply feature people who emphasize that his lies are well documented and his conspiracy theories are shameful and harmful.

When CNN does their seven or eight person panels, there is, invariably, a staggeringly inept liar representing Trump's interests, and he or she probably has a closely-aligned ideological fellow traveler who is only slightly less full of shit

Trump never had an ounce of credibility. Everything he says is a lie. So, why put him on TV? Why cover his rallies? Why send a reporter to tell the American people about anything he supposedly does? The media should simply note that Trump has no credibility and that anyone who hears what he says should know that they are being exposed to disinformation. They should simply say that Trump has no reportable information worth sharing. They should say, here's Trump playing golf. Again. Oh, and here's someone who is using disinformation to attempt to preserve his hold on power. Some tweets happened. None of this rises to the level where it needs to be taken seriously.

We are experiencing a massive disinformation campaign in this country, which is being perpetrated in order to discredit a credible counterintelligence investigation into the theft of the 2016 election and the subsequent obstruction of justice that occurred when information came to light about this in early 2017. The last thing anyone should do is amplify that message and bring it to a wider audience without, first, putting it into context and second, explaining that it is part of a campaign to manipulate the American people.

That is why you must resist. Voting is important, but resisting this attack on democracy is vital to preserving the idea of America.